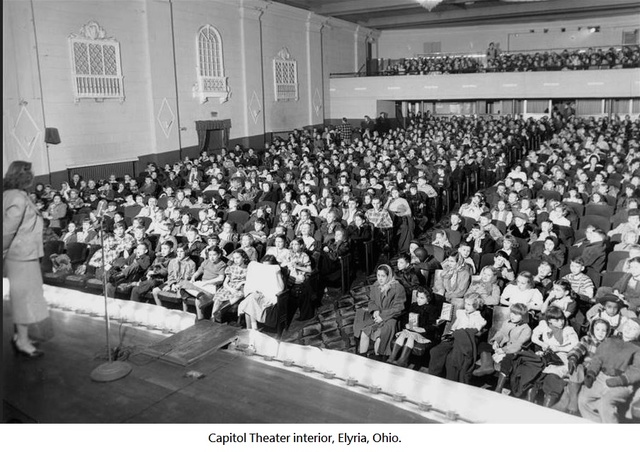 The Capitol opened in 1918, closing in 1972 after numerous closings and reopenings. The theater was torn down in 1975 for a badly needed parking lot.

Here is an account of the demolition in January 1976:

Capitol Theater is last to go

With little fanfare and almost unnoticed, Elyria’s motion picture theater era slipped quietly into history. Wreckers have begun the demolition of the Capitol Theater, 530 Broad St., which ceased operation in 1972. At one time, the last of Elyria’s three downtown movie houses and considered the finest, featured the better grade silent flicks.

It was built in 1918, the last year of the first of the World Wars and you could recognize it by its unique Spanish-looking facade. The Grand Restaurant, a top notch eatery, was located next to the theater. The first of the talking or sound movies, was a two-reeler entitled â€œStark Mad,â€ shown in the old movie house in the mid-twenties. Al Jolson. who appeared in the first talking motion picture, “The Jazz Singer,” was featured in 1927 when the new movies sounded the death knell of the silent movies.

“I worked as an usher there in 1920,” Charles E. Hengartner, 300 Washington Ave., said, and it was always a class theater house.“ "As a matter of fact, I saw "The Sheik,” starring Rudolph Valentino, 17 times while I worked there.“ he chuckled. The Capitol was host to many radio and television personalities and vaudeville acts. These shows would work week engagements in Cleveland and then stage one night stands here before moving on to larger cities.

“One of those shows featured the ‘Harmonica Rascals’ whose star was Borah Minnevitch, the tiny madcap harmonica expert,” Hengartner recalled. The theater also saw the introduction of technicolor movies in the late thirties and the three-dimensional flick where the moviegoers used celluloid glasses for viewing.

Admission in those pioneer days and even until the thirties was a nickel for children and a dime for adults. Some of those famed Saturday serials were run, but the Capitol did not particularly feature those old shows. With the advent of television, the 1000-seat theater experienced a checkered career of openings and closings with its final closing in 1972. A parking lot will occupy the present site. The frontage portion of the building which includes the American Shoe Repair, The Tux Shop, and Mac’s Restaurant, will remain. The property is owned jointly by First National Bank of Elyria and Mrs. Helen C. Ely, co-trustees of the William A. Ely Estate.

Here is a photo of the theater from the Chronicle-Telegram:
http://tinyurl.com/2pax6r

I saw the re-release of “2001: a Space Odyssey” there in ‘72; perhaps the last screening at the Capitol.