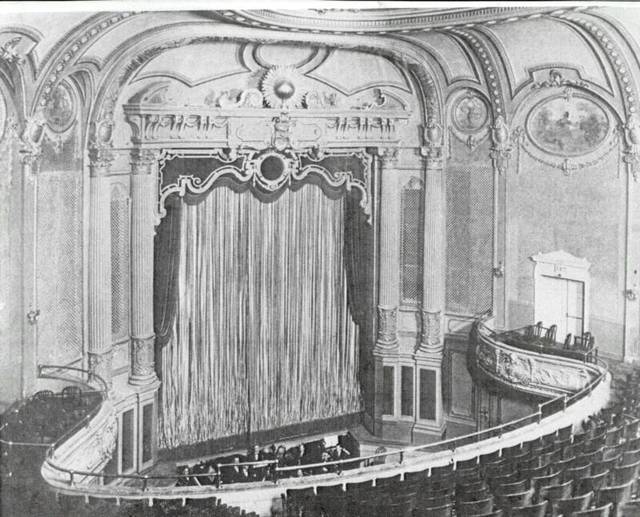 The 1,100-seat theatre was opened October 23, 1915 with Pauline Frederick in “Zaza”. Built by Henry W. Webb’s Northern Amusement Company. The auditorium is an almost direct copy of the auditorium of the 1913-built West End Cinema Theatre/Rialto Theatre, Coventry Street, London, England (which is now a casino and has its own page on Cinema Treasures), which was seen by Henry W. Webb while on a trip to London in 1913. The Parkway Theatre was equipped with a Moller 2 manual, 15 ranks theatre organ. In 1926 it was taken over by Loew’s Inc. and they employed architect John Eberson to redecorate the theatre. The Moller organ was replaced by a Wurlitzer 2 manual, 8 ranks instrument.

The area fell on hard times and the Parkway Theatre was closed in 1977. It became a Korean Businesses Owners Assn. Headquarters in 1989, and became office space in the 1990’s, but later became vacant.

Plans in 2001 to save the Parkway Theatre were also unsuccessful. With an upturn in the area in recent years, in early-2013, it was announced the Parkway Theatre was to be renovated and used as a new home for the Maryland Film Festival. The Parkway Theatre was reopened May 3, 2017. In addition to the original auditorium which now seats 925, two additional screens each seating 85 have been added. It was closed on January 1, 2023 due to financial problems.

The Charles Theatre, Baltimore’s ‘Art theatre’ is just around the corner on Charles Street.

A recent photo essay that appeared in the Baltimore Sun.

The Parkway is about to be renovated and expanded as the new home of the Maryland Film Festival: Baltimore Sun article

The area surrounding the Parkway has seen a renaissance in recent years as the Station North Arts District. Numerous live-theatre groups, restaurants and clubs have opened in the area, and the Maryland Institute School for the Arts has expanded to a nearby site.

There was a 100th birthday party for the Parkway on 10/23/15. Held across the street. Live music, food, outdoor film projections, and a chance to hear firsthand about the Maryland Film Festival’s plans to turn the Parkway into a 3-screen film center. Copy courtesy of Amy Davis. Below is her Flickering Treasures Facebook page with many more photos of the Parkway and other theatres.

The Parkway became part of the Loew’s circuit on October 4th, 1926, the same day as the downtown Century Theatre. I’ve posted a shared ad at the CT listing for Loew’s Century.

Construction continues at the Parkway site. The restaurant building to the left of the theatre has been demolished – this will be the location of three smaller theatres, which are now being built. Work continues on the interior of the Parkway, and signs advertise a spring 2017 opening.

The Parkway reopened as a movie theatre on May 3, 2017. Two 85-seat auditoriums have been added to the restored original screen. Status should be set to Open/Showing Movies.

There is an eight-page article on the Parkway and it’s restoration in the Summer 2018 issue of Preservation magazine. Too many details to add in this message except that the original architect was Oliver Wight [sic].