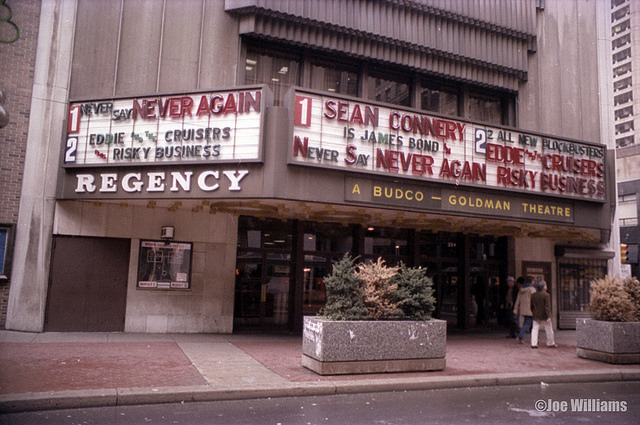 At the time of construction, Goldman accurately predicted the Regency Theatre would be the last really large (single screen) theatre built in downtown (Center City) Philadelphia. In the Center City Philadelphia, Goldman then opened the Randolph Theatre (named after his son), and within a block or two of the Regency Theatre, he operated the Midtown Theatre (now Prince Music Theatre) and the Goldman Theatre.

On the Regency’s façade, Motion Picture Exhibitor described ‘a venerable waterfall of extruded Duranodic aluminum flutes simulating a great bank of organ pipes cascades from the rooftop’ (so that’s what that was supposed to be!). A huge tri-faced glittering, golden marquee with many light bulbs on its underside was approved by Philadelphia’s Art Jury. With the Duke & Duchess Theatres on the same block, and many other movie theatres nearby on Chestnut Street West, the theatre marquees lit up at night to give a cinematic Broadway style appearance to Chestnut Street.

The color scheme of the lobby walls was white on ivory in a ‘montage’ pattern vinyl contrasted against an austere brown-olive cork vinyl used to simulate the Duranodic entrance doors and trim. The carpet throughout the theatre was a ‘red on red sort of sky-rocket-explosion effect shadowed in black.

The auditorium had 1,200 seats including a small and shallow balcony with perfect sightlines. The side-walls of the auditorium were covered to wainscot height with white on ivory vinyl, and above that there was ivory and white drape fabric. The Regency Theatre was equipped to show 35mm and 70mm films. Mainstream movies were shown. When there were not enough first run films for Center City theatres, like many of the other Center City theatres, the Regency Theatre showed ‘X’ rated pictures, causing Hollywood studios to have disdain for Philadelphia movie operations.

In 1972, Goldman sold his theatres to Budco, another Philadelphia movie theatre operator. Budco twinned the theatre in 1976, with a wall down the middle, turning it into the equivalent of two bowling lanes or tunnels. As a single screen, the Regency Theatre showcased films. As a twin it lacked the appropriate architecture for movies. The Regency Theatre finished as a single-screen theatre with the 10:35pm showing of “Taxi Driver” on April 6, 1976. The twinned theatre reopened May 19, 1976 with “Tunnel Vision” at Regency I and a double feature, “Hard Times” and “White Line Fever” at Regency II. The world premiere of Brian DePalma’s “Blow Out” was held at the Regency Theatre on July 23, 1981 with stars John Travolta and Nancy Allen attending.

At the end of 1987, the Regency Theatre closed. One of the last movies shown “batteries not included” about residents trying to save their building from demolition, seem fitting. By then, the Regency’s Chestnut neighbor, the Duke & Duchess theatres, and other buildings had already been demolished. Open for movies at Christmas time, the Regency Theatre sat alone on the block, it too, about to be closed and demolished for the construction of the glamorous Liberty Place office skyscrapers, hotel, and shopping mall complex. The Liberty Place announcement specified that movie theatres would be included. They were not.

That stupid street lamp ruined a great looking marquee,something you don’t see anymore at these 20plexes , so many of you seem to love.Ken mc thanks for the picture of a great theatre and McQueen Flick.

My Grandfather managed the Regency in the late sixties/early seventies. I have wonderful childhood memories of going there some Saturday afternoons to see the Pink Panther cartoons they showed before the features and free runs at the candy counter.

Apparently American Classic Images which had tons of wonderful theater pictures is out os business. When you click on any of the links it says domain for sale. :(

Vince Young informs me that Love Story, which bigger box office grosser that opened in 1970, opened here in Philadelphia on Christmas Day 1970.

The Regency’s opening was delayed until June 30th, 1967. Two grand opening ads in the photo section.

According to at least two Inquirer stories in 1966-67, this theater was going to be called the Ambassador. I didn’t find an explanation of why the name was changed before the opening.

One of those articles contains a tantalizing mention of a proposed Philly theater that was never built: a 600-seat first run house at Front and Delancey, to be called either the Mariner or the Society Hill and operated by “Walter Reade-Sterling”. The same piece reports the imminent openings of Theatre 1812 and the Eric-Rittenhouse, as well as a rumored reopening of the Viking (which did come back, as Cinema 19). Busy times!