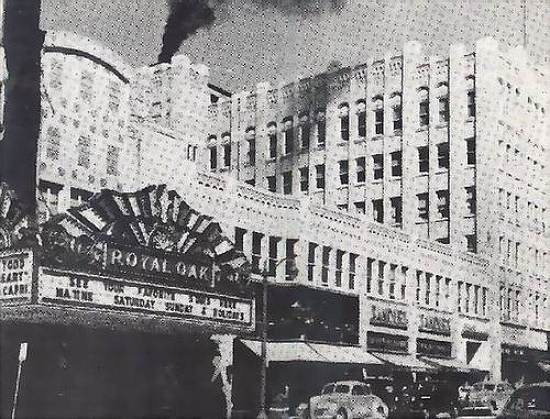 The Royal Oak Theatre was opened in 1928. It was designed by the architectural firm Rapp & Rapp out of Chicago, and was built by the Kunsky Theatres chain. By 1978 movies had ceased and since then it has operated as a live performance and concert venue.

The Royal Oak Music Theatre is open, their website is www.royaloakmusictheatre.com and provides a full list of their shows.

The Royal Oak theatre was designed by Rapp and Rapp, it is an excellent example of true art deco (an often mis-used description), with stylized floral relief work and geometric shapes. It is of the “shallow balcony” that many late R&R houses featured. Built for the Knusky Chain, it was part of a suburban Detroit “holy trinity” of like-sized houses, the Birimingham, the Royal Oak and the Redford. They all had identically equipped Barton 3-10 organs, the consoles varied to match the theatre interoirs, and they were sold on the same contract, and had sequential opus numbers. The Royal Oak was operated by the community theatre chain until the mid 70’s. The lobbies suffered from dropped ceilings during this time. The fisrt concert held at the newly re-christened “Royal Oak music theatre” was Maria Muildar, in 1975. Various promoters have operated the theatre as a mainly rock concert venue for the last 30 years. The Barton organ was brought back from the brink of death (it was badly water damaged and thought by some to be beyond salvage) by the local ATOS chapter in 1968, led by crew chief Mert Harris. Many organ/silent film concerts were presented in the Royal Oak by the Motor City ATOS, including two performances of “Queen Kelly” with a personal appearance by it’s star, Gloria Swanson. The theatre changed hands again, and in the early 90’s the organ was “evicted” by the owners, who felt it didn’t fit in to what they want to do. The outer lobby was wonderfully restored, and the Royal Oak area today is a thriving area of clubs,restaurants, galleries and shops.

This theater is located in the Washington Square Building downtown.

Here is another photo:
http://tinyurl.com/nh2qkj

Here is yet another photo:
http://tinyurl.com/ykjfya9

I grew up seeing movies there as a child. I particularly remember old Shirley Temple movies show there during the summer as old reruns. You would buy a ticket that got you in to all the shows for a summer series. Later as a teenager I went to concerts there. Spectaculr memories, all of them. I live on the west coast now and I miss it very much.

Wait, I just remembered, I saw Cheech and Chong there, live! What a rush that was! :)