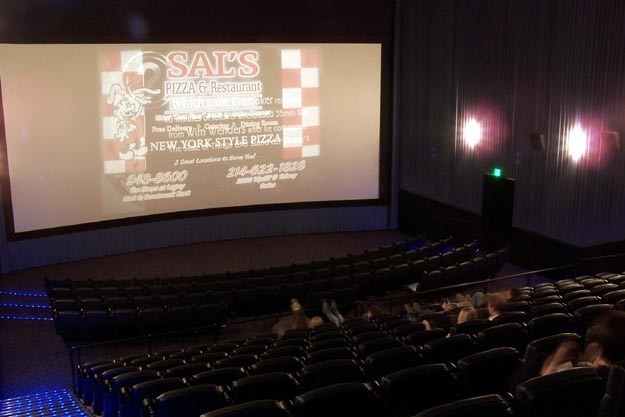 Announced in 2002 as part of the 23-acre Legacy Town Center in West Plano, Angelika’s second Dallas area art theater was set to open in 2003. This was architect Frank Dagdagan’s fourth theater for Angelika. He said that the theater has a bohemian aesthetic with unique art and showcasing raw materials including concrete, steel, two-story wall of glass, wood, marble and bamboo. Like other Angelika’s a large crystal chandelier was featured with this one accented with blue neon. The focal point upon entering is the grand staircase leading both to concession/café/ lounge area and the auditoriums. Black-box style auditoriums featured Dolby Digital sound, stadium seating, retractable armrests with cup holders at each seat, and “wall-to-wall” screens. The two largest houses had all-leather seating.

The delayed theater had a soft launch with the Dallas South Asian Film Festival’s repertory screening of “East is East” on June 21, 2004 and then having its official grand opening on June 23, 2004 with “Fahrenheit 9/11” playing on three of the five screens. The theater was seen as progress for moviegoers not only being Collin County’s first art house but in 1990, the Mayor of Plano kept the film, “The Cook, the Thief, His Wife & Her Lover” from being shown in the city saying “I can… understand if you show it in Dallas, Texas. But Plano is a community of suburban families.”

With the AMC Stonebriar just to the North along with the and the wildly successful Cinemark West Plano just to the South, the cinematic dollars were heading North as West Plano / Frisco became DFW’s hottest place to watch new films: mainstream and art, included.

Very busy arthouse venue (that will occasionally sneak in a blockbuster title). Entrance in on the 1st floor while all 7 auditoriums are on the 2nd floor. With no other arthouse options on this side of town, this theatre should be in business for a long long time to come.

The Angelika Film Center & Café - Plano closed along with the other locations on March 16, 2020 due to the COVID-19 pandemic. It reopened November 13, 2020 only to close again for COVID-19 on January 6, 2021. The Angelika Dallas continued on a weekend operation. The Angelika Plano then reopened for business on April 9, 2021.