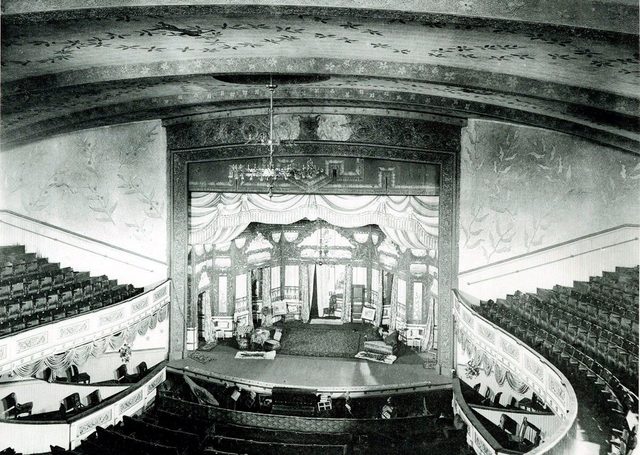 The Waldorf Theatre, along with the Warner Theatre in downtown Lynn, was operated at one time by the Warner Brothers Circuit Management Corp. Further information welcomed.

The MGM Theatre Photograph and Report form for the Waldorf Theatre in Lynn has an exterior photo dated May 1941. The Waldorf had a notably handsome and very fancy ornamented facade. There was a 3-sided marquee above with “Waldorf” in big letters on the front panel. The attraction was Paul Muni in “Hudson’s Bay.” Below the marquee was a centered box-office with sets of double doors on each side. The Report states that the Waldorf had been showing MGM product for over 10 years; that it’s over 15 years old; in Good condition, with 700 seats on the main floor and 749 balcony seats; total: 1,449 seats. The 1942-43 Motion Picture Yearbook lists the Waldorf and the Warner theatres in Lynn as being part of the Warner Brothers theatre chain.

The Waldorf opened as the Lynn Theatre on September 6, 1888. It was purchased by Harry Kelsey, president of the Waldorf restaurant chain in 1919 and renamed it the Waldorf Theatre. there were a number of Waldorf theatres in Massachusetts. Warner Bros, acquired the theatre in 1930 and operated it until it closed in 1956.

Further info about the Waldorf from Barry Goodkin. It was damaged by fire on May 18, 1904 and then repaired and reopened. It was, of course, originally a live theatre. It was renamed Park Theatre briefly from 1918. After closing in 1956, it was demolished in June 1965 to make way for the Lynn Market Place. Under its original name, Lynn Theatre, it is listed in the 1897-98 edition of the Julius Cahn Official Theatrical Guide. Dodge & Harrison were the Mgrs. The seating capacity was 1,300 and the house had electric illumination. The proscenium opening was 34 feet wide X 28 feet high, and the stage was 40 feet deep. The theatre was on the ground floor. There was one daily and 2 weekly newspapers, and 3 hotels in town. The 1897 population of Lynn was 65,000.

The Waldorf is listed in the 1927 Film Daily Yearbook as having 1,500 seats and open daily.