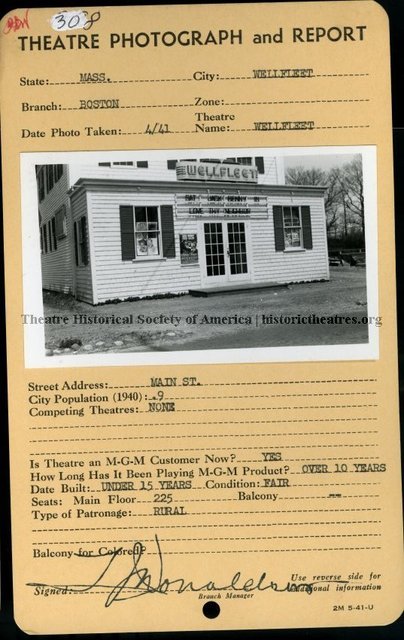 The Wellfleet Theatre was a quaint cinema in the town of Wellfleet on Cape Cod. It was an adaptation of an existing old building. Further information welcomed.

The MGM Theatre Photograph and Report form for the Wellfleet Theatre has an exterior photo dated April 1941. The cinema was located in a wood-frame building with clapboard siding at least 2 stories high. There was a small, one-story projection at the front. The windows all have black shutters. The entrance is at the center— a single pair of French-style doors. Above the entrance is a large wooden board with 4 rows for posting attractions. Above that is small, lighted sign “Wellfleet”. There is a small poster board to the left of the doorway. The windows, one on each side of the doorway, are filled with more posters. The Report states that the theatre is on Main Street, that it has been showing MGM films for 10 years; that it’s less than 15 years old and in Fair condition, and has 225 seats. The 1927 Film Daily Yearbook has only “Union Hall” listed for Wellfleet, with 200 seats and open one day per week (probably Saturdays). It’s probable that Union Hall and the Wellfleet Theatre are one in the same.

Operated in the Fifties by a man named Atwood.Summer venue only.

I’m not sure the Union and the Wellfleet are the same. they are both listed in the 1944 FDY, although the Union is designated as closed.