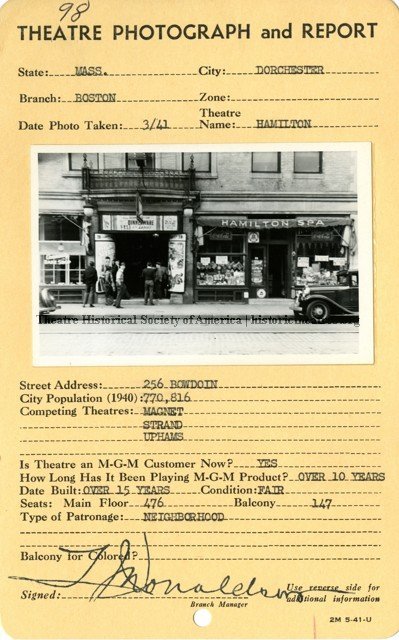 The Hamilton was one of Boston’s more obscure neighborhood movie theatres. It was located in Dorchester, to the south of downtown. Further information welcomed.

There is a MGM Theatre Photograph and Report form for the Hamilton Theatre with an exterior photo dated March 1941. The theatre had a narrow entrance in the middle of a commercial block at least 2 stories high. The entrance appears to have one double door and above it is a small balcony with a wrought-iron fancy railing. Two old globe lamps hang from the balcony soffit. On either side are huge half-round poster boards. There was no marquee. To the right of the theatre was the Hamilton Spa (“Spa” was an old Boston-area expression meaning Variety Store, or Convenience Store). Lounging in front of the theatre are several male youths who look like they are on their way to a casting call for a Bowery Boys/ Dead End Kids movie. The Report says that the Hamilton has been showing MGM films for over 10 years; that it’s over 15 years old and in Fair condition, and has 476 seats on the main floor and 147 in the balcony, total: 623 seats. The Hamilton is listed in the 1927 Film Daily Yearbook as having 700 seats and being open 7 days per week.

The Hamilton Th. is listed at 256 Bowdoin St. in Dorchester in a Boston business directory, Issue 85, which I think is 1921.

Is the location of this theater near Meeting House Hill in Dorchester? Was it originally called “Hamilton Hall”? The radio comedian (and big star of the 1930s and 1940s) Fred Allen, in his autobiography, says that in early 1914 he was booked into small-time vaudeville and one of the theaters he played was “Hamilton Hall in Dorchester near Meeting House Hill”. It was run by a Mike Lyon, who also ran the Imperial Theatre in South Boston.

Yes, Meeting House Hill is just a few blocks away, with First Parish (Dorchester) church on top of the hill.