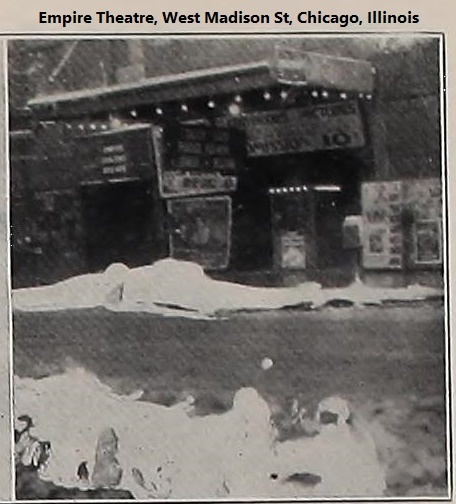 Originally opened May 25, 1893 as an addition to an existing building with a hall on the second floor, and seating 1600, with fourteen boxes, a circle, and a balcony. Stage was 38' wide at proscenium by 42' deep. Colors were ivory and gold with terra cotta decorations and murals. There was a major fire in March, 1895. It was sold in 1906 and again remodeled. Jazz Age Chicago and Sanborn maps give a later capacity of 1273. American Contractor index says this was a 1911 Rapp & Rapp remodeling. It was in operation at least into the 40s. Going with the current trend here, here is a May 17, 1915 Tribune article on someone getting shot:

“STAND BACK, MEN! BANG! SOME THRILLER IN MOVIES.
Then Joe Digatno Limps Out of Theater with Discharged Revolver in Hip Pocket.

Out flashed Piute Pete’s shooting iron. Pete’s lips moved in a soundless imprecation as he pulled the trigger.
Bang!
The Saturday night audience in the Empire theater at 673 Madison street gave the management proper credit for the thrill. They were too wise in the ways of moviedom to be fooled into believing the shot wasn’t part of the show.
But shortly thereafter Joseph Digatno of 729 Madison street quietly limped out of the theater, followed by his wife. He told Dr. John P. O'Connell, who has an office at Halsted and Madison streets—-and subsequently the police—-that an unidentified party had shot him from behind.
Young Mrs. Digatno hadn’t been properly coached. She said the revolver from which the bullet had come had been in her husband’s own hip pocket. Surgeons who examined Digatno’s wound in the Robert Burns hospital said Mrs. Dignato probably was right."

Oh, and the Kennedy expressway is on the site now.

Scratch that- the Rapp & Rapp work was actually a building at 665 Madison, not the theater.