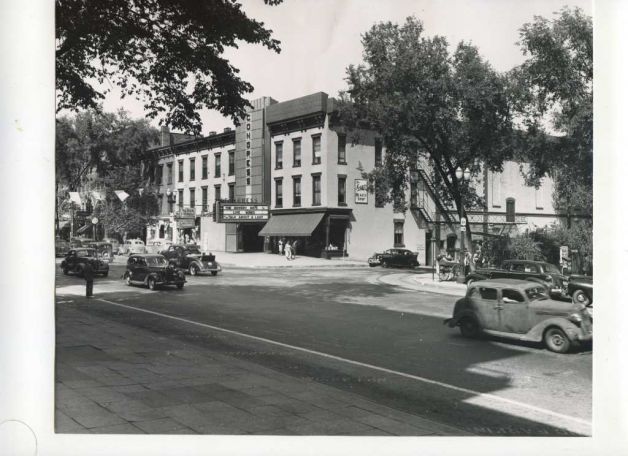 Luis: I have a few memories of it as a child. It had a spare, modern feel to it, with a big heavy set of velvet drapes. And I seem to recall a large neon clock over one of the exit doors, just to the left of the stage.
We have a large repository of historical photographs at our local history museum here in Saratoga Springs. I do have two copies of photos of the interior of the Congress Theater (neither showing the organ, unfortunately). I will check to see if they have any photos of the interior of the Community Theater.

If somebody wants to add the Community Theatre, it was a Thomas Lamb design. A brief item about Reade’s intention to build the house appeared in Boxoffice, December 26, 1936. The item is on the left page, about the middle of the middle column.

An August 7, 1937, Boxoffice item says this about the Congress Theatre: “Within a week after the opening of his new Community here, Walter Reade announced that he has purchased for $200,000 cash the Congress Theatre and office building which, when he takes possession late this fall, will give him two first-run theatres in this famed city of horse racing.”

The Congress Theatre was remodeled about the time Reade bought it. There are before-and-after photos in Boxoffice of January 8, 1938. The design was by architect William H. Vaughan.

Vaughan, incidentally, was named for his grandfather, who had also been an architect and had designed a number of important buildings in Saratoga Springs, including the United States Hotel.

Is this building really the Congress Theatre or is it some other unknown theatre? The address I have for the Congress was 328 Broadway, but the building above clearly shows an address of 260 Broadway.

Here is a picture of the Congress from a recent article about theaters in Saratoga Springs that appeared in the Times Union.

As a kid I remember the Congress Theater sitting on the corner of Broadway and Spring St across from the old library, later it became the House Of Gee which was a chinese restaurant and they use the old huge marquee sign to advertise their restaurant, and I had many fun times at the Community Threater seeing movies and even live shows….

My earliest memory ( early 60’s) of the congress theater was that it was closed, and then I remember it opening as the Chinese restaurant, the house Of Gee. My mom and dad took me to eat there one night and I finally got to see what it looked like inside.

Linkrot repair: The before and after photos in Boxoffice of the Congress Theatre, remodeled in 1937, can now be seen at this link.

Although equipped for moving pictures, the attraction at the Congress Theatre’s gala opening on August 21, 1919, was the Arthur Hammerstein-produced musical comedy Somebody’s Sweetheart, performed by the original New York cast.