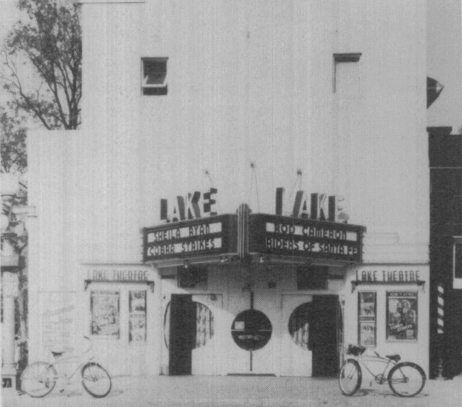 There is a photo of the Lake on this page:
http://tinyurl.com/2mavgn

An item in the November 20, 1940, issue of The Film Daily said that Greenville’s new Lake Theatre, then under construction, was expected to open around December 1. The 400-seat house was being built on the site of another theater called the Bijou, but the item didn’t say what had become of the Bijou, so it might only have been a rebuilding of an existing theater. The opening advertisement in the December 22 issue of the Greenville Delta Democrat-Times gave the address as 224 Washington Avenue.

The Lake Theatre built in 1940 lasted only 20 years. The December 18, 1960, issue of the Greenville Delta Democrat-Times said that demolition of the theater was underway, and that Gulf State Theatres would build a new, larger Lake Theatre on the site. Local architect H. E. Norwood was drawing the plans.

The article also indicated that the Bijou had dated back to the silent era and was a reverse theater. Other articles in other issues of the paper indicate that the Bijou was in operation by 1914.

Address 224 Washington Avenue, the theatre launched December22, 1940 with Bob Burns in “Alias the Deacon.” The Dixie Theatre dating back to 1907 was in the same spot as the new Lake.