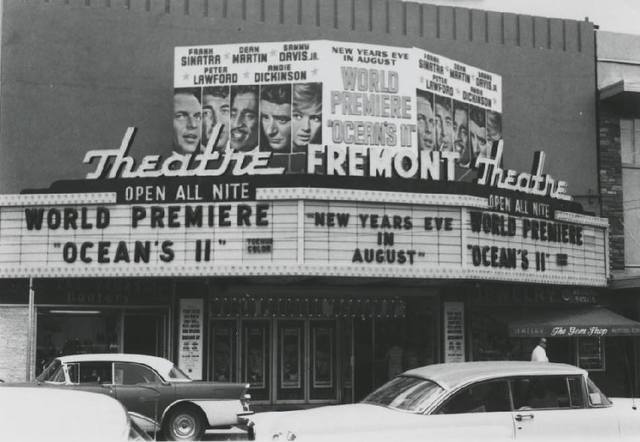 The Fremont Theatre was attached to the famous casino/hotel of the same name. It opened on May 29, 1946 with Franchot Tone in “Lost Honeymoon”. It was owned by Earle C. Strebe, and operated by George Ingram. The auditorium had a raised stadium section at the rear.

It was still open in 1981, but was later been closed and demolished.

In 1952, I was going to school at LVHS and working part time at this theater, I really loved my job. I think the manager at that time was a Mr. Ealy. I’ll never forget New Years Day the movie showing was Breaking The Sound Barrier with Natalie Wood and Karl Mauldin. After work we would go next door and have the best French fries in town. Down the street there was an Orange Julius stand that we went to also. My grandfather was a bookkeeper for Las Vegas Distributing. Those movies were the best ever made

Breaking The Sound Barrier was a British film from around 1952—-Natalie Wood and Karl Mauldin were in Bombers B-52 in 1957.

I was the doorman of the Fremont and the afternoon manager of the Huntridge for most of 1959. New mr. Katz and Mr. Zumar.

I saw several movies at the Fremont on various trips to downtown Las Vegas: “The Owl and the Pussycat” (Barbra Streisand and George Segal, 1970); “Sleeper” (Woody Allen and Diane Keaton, 1973); and “Galaxy of Terror” (Erin Moran, Robert Englund, Edward Albert, and Ray Walston, 1981). So it was open at least that late. After it was demolished I believe it was assimilated by the Fremont hotel-casino. Resistance was futile…. Cheers.

Just reading the past posts - somebody mentioned that they saw “Dawn Of The Dead” here. Unfortunately, the poster got the Fremont confused with the Cinemas 1-2-3 which did run the movie - in 1978. As others pointed out, the Fremont “closed up shop” in 1974. Also - it was a single screen theatre - not a triplex like the Cinemas.

Another thing about the Fremont that made it different from the other Vegas movie theatres - it had, during it’s “heyday”, a true loge (to today’s movie goers, what is known as “stadium seating”), and a “waterfall curtain” in front of its screen. (At the other indoor theatres, their curtain{s} would just open - one to the left & one to the right. (These days, with multiplexes everywhere, it seems none of them have any curtains in front of their screens.)

As for why the theatre closed, a pretty DUMB MOVE on the part of that friggin' hotel - “Oh - we need the space to expand our operations!” Then again, that’s how Vegas was & is - A FRIGGIN' TOTAL LACK OF RESPECT ON IT’S HISTORY!