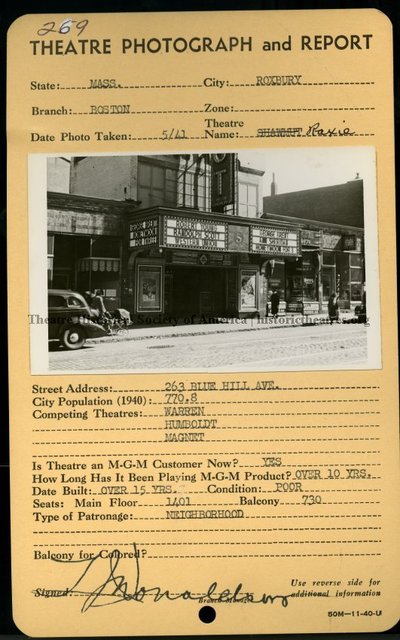 The Shawmut Theatre was a large neighborhood house in the Roxbury section of Boston. It was opened by 1914. By the early-1940’s it was operated by Mullins & Pinanski Theatres, a subsidiary of Paramount Pictures Inc. Still named Shawmut Theatre in 1943, by 1950 it had been renamed Roxie Theatre. It was still open in 1956, but had closed by 1957.

The MGM Theatre Photograph and Report form for the Roxie has 2 photos of the exterior. One is dated May 1941 when the house was named Shawmut Theatre. The entrance was in a head-house which was 3 stories high and had a pitched roof. The head-house was in the middle of a 1-story commercial block. There was a rectangular marquee with the letter “S” set in a crest in the center. Above the marquee was a large vertical sign reading “Shawmut”. Movies posted are “Western Union” and “Honeymoon for 3”. There was a huge poster case on each side of the entrance. The Report states that the Shawmut had been a MGM customer for over 10 years; that it was over 15 years old; was in Poor condition, and had 1401 seats on the main floor and 730 balcony seats, total: 2,131 seats. Someone crossed out the typed name “Shawmut” and wrote in “Roxie”. The second photo is undated, but cars in the photo hint at a date circa-1950. There is a new triangular marquee with “Roxie” in script letters at its top. The huge vertical blade sign is gone. The red-brick facade of the head-house appears to have been painted white or some light color. The theatre is listed in the 1942-43 Motion Picture Almanac as the Shawmut and under control of M&P Theatres.

As the Shawmut Th., this house is listed in the 1927 Film Daily Yearbook as having 1400 seats, open daily. The seat count seems too low.

In the street directory section of the 1918 Boston Register and Business Directory, Issue 83, there is a Shawmut Theatre listed at 364 Blue Hill Avenue, east side, between Creston St and Intervale St. This address is on the opposite side of the street and a hundred numbers to the south of the address above. It’s possible that the 1941 MGM Theatre Report is incorrect (what a surprise), or possibly there was an earlier Shawmut Theatre ???

The Shawmut was at 364 Blue Hill ave, between Creston and Intervale. This is Grove Hall, and it’s the old Jewish Roxbury. The building was oddly shaped – it actually got narrower towards the stage. This was probably dictated by the property line on one side, which angled in towards the back/stage end of the building. It looks much larger than most of the other Roxbury theatres.

Yes, it was a big theater with over 2100 seats. Thanks for the clarification about the street address. I was suspicious that the “263” number was not correct.

Here’s a 1931 map showing the Shawmut on Blue Hill ave. I’ve turned the map upside down to make the reading easier, so north is at the bottom of the image.

Mark- please look on the 1931 map to see if the Niagara Temple Theatre was still around at 320 Blue Hill Ave. I suspect it may have been gone by 1931.

Ron – here’s the Niagra in 1915. It was still there in 1931, listed as Public Netoco Theatres Corp. It’s the only wood frame building of the bunch.

Mark- OK, thanks. If it was still running in 1931, then it would indeed have been part of Publix/Netoco. And it would have been wired for sound. I knew that it had a street running along its right side.