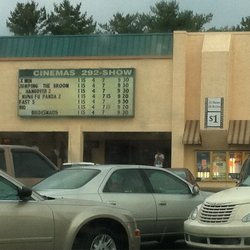 Located at the intersection of High Point Road and Groometown Road in the Sedgefield Crossing Shopping Center. This theatre opened as the Litchfield Cinemas 7 on September 28, 1990. It was also under the name Sedgefield Crossing Cinemas. It was taken over by Regal in 1994 and it was renamed Regal Cinema 7 until Regal dropped it in 2001.

In April 2002 and independent chain took over and renamed it Sedgefield Crossing $2 Cinemas that shows 2nd-run movies at discount prices. It was closed in April 2020 due to the Covid-19 pandemic.

$2 for a ticket? The last time an adult paid that price for a movie was early 1980 in Australia

Regal Cinemas ran this theater as the Regal Cinema 7; they dropped this theater around 2001. This theater was reopened by an independent as the Sedgefield Crossing $2 Cinemas in 2002 as mentioned above in the introduction.

And they have $1.00 Tuesdays and free popcorn if you subscribe to their newsletter!!!!!!!!!

NightHawk 1, kencmcintyre, and Scott Neff: This theater did not opened in 1988. However I found the ads for this cinema and it opened on September 28, 1990 as the Litchfield Cinema 7(aka Sedgefield Crossing Cinema 7) under Litchfield Theatres. Regal took over in 1994 and it was called the Regal Cinema 7 until Regal ceased operations in 2001. It reopened under an independent chain(Kleesburg Theatres)as a second-run discount cinema in 2002.

I have the ads if you need to see the grand opening of the Litchfield Cinema 7 from September 28, 1990. Please contact me at for more information.

This theatre unfortunately closed it’s doors in April of 2020, another casualty of the pandemic. It had turned into a $3.99 theater that played first run films before it’s demise. Also, a car had run into one of the auditoriums in 2019, and insurance refused to pay.