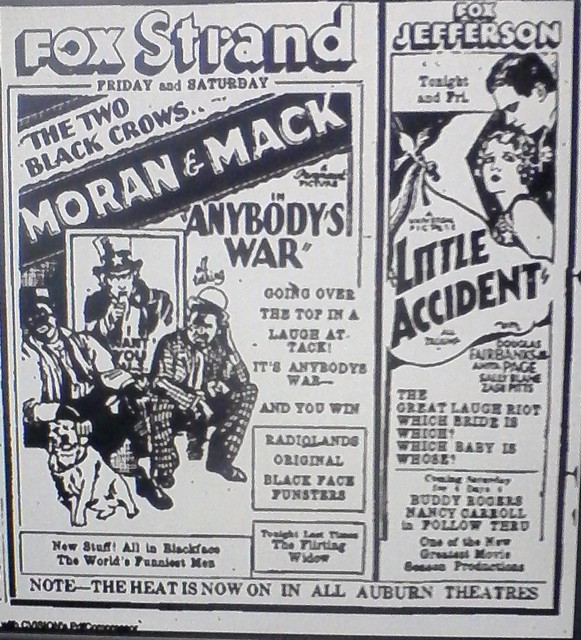 The Burtis Auditorium was listed in the 1914-1915 edition of American Motion Picture Directory. By 1925 it had been renamed Strand Theatre and had been equipped with a Marr & Colton 3 manual 11 ranks organ. By 1941 it was listed as (Closed) in that year’s Film Daily Yearbook, and the same in in the 1943 edition.

Google photos just show a parking lot at this address.

I have a program from the Burtis Grand in Auburn. I am an Auburn NY breweriana collector. The Burtis family were also brewery owners in Auburn. There is a nice Koenigs Brewery ad on the back of the program.

The January, 1905, issue of National Magazine mentioned the Burtis Auditorium in Auburn as having been “just erected.” It must have opened in late 1904 or early 1905.

The March 6, 1907, issue of the Auburn Citizen said that a five-cent vaudeville and movie theater had opened the previous night in the Burtis Auditorium Annex. As early items abut the Burtis Auditorium gave it a seating capacity of up to 6,000, and one report said that its stage was 100 feet wide and 42 feet deep, I wonder if it was this annex that eventually became the Strand Theatre? If not, then the auditorium itself must have been downsized considerably.

A partial list of the works of architects Leon H. Lempert & Son compiled by Ranjit Sandhu (it says “Rough Draft- Not for Publication or Distribution” but somebody has posted a PDF to the Internet) credits Leon Lempert Sr. with the design of both the Burtis Opera House and Burtis Auditorium.

It gives the opening date of the Auditorium as June 14, 1904, and gives the house the aka Loew’s Strand. I think Sandhu got the demolition dates of the two house reversed though, as he says that the Capitol Theatre (former Opera House) was demolished in 1939 and the Strand in 1953. We know that the Capitol was still in operation in the early 1950s, so I’m thinking it was more likely the Strand that was demolished in 1939, even though it was still being listed in the FDY in the early 1940s.