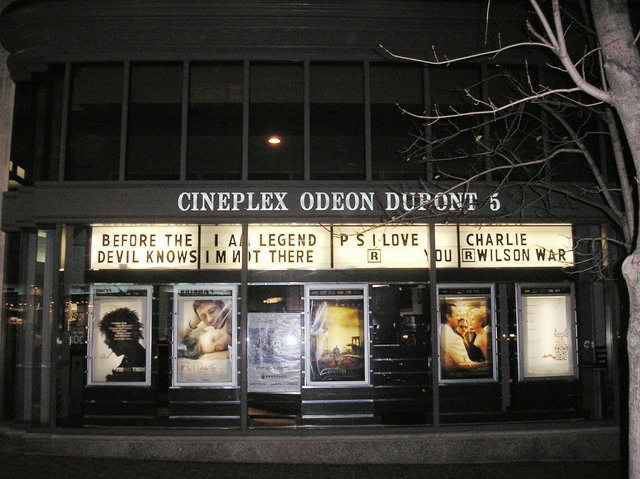 Opening December 25, 1987, this five-screen arthouse replaced the original 360 seat single screen that was on the other side of the building facing Connecticut Avenue and which opened in 1948. Opening films included “Dirty Dancing”, “Matewan” and “Maurice”. The auditoriums were small, with the smallest auditorium having 59 seats. Three of the other auditoriums had 120, 130 and at 139 seats, the biggest in the complex.

Washington Post’s Editorial Review:
The Loews Dupont Circle 5 is a stronghold for small, independent films, some of which you won’t see anywhere else in in the Washington area. Unfortunately, the quarter here are somewhat cramped. The lobby is extremely small; patrons are encouraged to buy their ticket and wait outside. Luckily, there’s plenty to keep you busy in the hip and bustling Dupont Circle neighborhood. All the theaters and screens are small. The seating capacity ranges from 59 in the smallest theater to 139 in the largest. Two others seat 120 and 130. If you go, take Metro. The theater is only a few steps from the Dupont Circle stop and street parking is hard to find.

The last movie theater standing in Dupont Circle, a neighborhood once known for its small, funky, foreign and art-house film offerings, will close in January after struggling to compete with the area’s bigger and newer multiplexes.

AMC Loews Dupont 5 will screen its last shows Jan. 13 and leave at the end of that month when its 20-year lease expires, spokeswoman Melanie Bell said. A retail store, whose name was not disclosed by the building’s owner, is expected to take the theater’s place once the interior is gutted and remodeled.

Dupont 5, the last of the small, foreign and art-house cinemas in a neighborhood once filled with them, is closing in January. (By Bill O'leary — The Washington Post)

COMMENT
washingtonpost.com readers have posted 3 comments about this item.
View All Comments Â»

Discussion Policy
The demise of the Dupont 5 reflects the increased difficulty for smaller, neighborhood theaters competing with megaplex venues. Those behemoths, after conquering the suburbs with their stadium seating and surround-sound offerings, have steadily gained a foothold in urban markets. It is also a sign of the continuing change underway in one of the most distinctive neighborhoods in Washington, one brought on by increasing rents for commercial real estate.

“It was a small theater that played small movies,” Rob Halligan, president of the Dupont Circle Citizens Association, said. “The point is we are losing the funkiness of Dupont.”

Opened in June 1987 by Dupont Circle Theatres, the movie house changed ownership several times as the industry consolidated. In its heyday in the 1990s and 2000s, it often showed the same films as the venerable Key Theatre in Georgetown and what is now the AMC Loews Shirlington 7 in Arlington.

The cramped, five-auditorium, 725-seat theater occupies the ground floor of a 12-story building at 1350 Connecticut Ave. NW built in 1927. Its neighbors include a Krispy Kreme Donuts, the restaurant Cosi and a Ben & Jerry’s as well as the clothing stores Green and Blue and Proper Topper.

“I used to go there for art films all the time, though I am not a great fan of the screens,” said Aviva Kempner, a District-based independent filmmaker who has watched the number of small theaters dwindle in the District over the past decade. “And what’s great about the Dupont theater was its specialization in gay cinema and its specialization in art movies. It knew what its constituency was, and now I am worried that some of those art movies will not even play anymore.”

Dupont 5 has shown more blockbusters in recent years and has struggled to define itself and compete with the art houses opened by Landmark Theatres at Bethesda Row in 2002 and E Street in 2004, said Andrew Mencher, director of programming at the Avalon Theatre on Connecticut Avenue in Northwest Washington.

With the addition of megaplexes at AMC Loews Georgetown 14 and Regal Cinema’s Gallery Place Stadium 14, the demand for mainstream movies has been diverted as well, leaving the Dupont 5 in a sort of theatrical twilight zone.

“No doubt a movie theater could be highly successful in Dupont Circle,” Mencher said. But, “these days people want a nice facility, good projection and stadium seating.”

Nationally, AMC Loews has been making the shift from small movie houses and consolidating into megaplexes when and where it can. The average theater operated by AMC Loews in the United States and Canada has about 14 screens.

“What they want to do is get out of those leases and put all those movies in one theater,” said Bradford Brown, president of Brown Entertainment Group, based in Los Angeles. “There is a lot of efficiency in a multiplex.”

Smaller theaters of two and four screens were extremely profitable before the rise of the big theaters saw customers traveling farther to see films, said Dennis McAlpine, an independent researcher and movie industry analyst based in Pawleys Island, S.C.

In the late 1990s and early 2000s, several movie theater companies went out of business, consolidated or purged their portfolios of smaller, less profitable theaters. The box office in general is still hurting from the rise of other forms of entertainment such as video games, the Internet and the DVD, but overall the industry has recovered, McAlpine said.

“Until probably about two years ago, you went through a period of consolidation,” McAlpine said. “You are back to a golden area, to an extent, because the portfolio trimming has taken place, you got all the losses out of the way and started making money on the new stuff.”

In Washington, while there are numerous examples of small theaters closing, the number of screens has increased in the past decade, according to the National Association of Theatre Owners.

Nevertheless, the closing of those theaters has often been met with expressions of loss — of character, time and place.

In June 1996, the Biograph in Georgetown closed after a nearly 30-year run as an independently owned, single-screen art house that was “the closest thing to a true underground cinema the D.C. area has ever seen,” according to an article in The Post.

The next year, Palisades residents protested the closing of a theater by the predecessor to AMC Loews, Cineplex Odeon. It became a CVS Pharmacy.

In June 2002, the Janus 3 in Dupont Circle, which once had its own film club and midnight showings of experimental films, closed.

In May 2000, the Embassy was resurrected as Visions Bar Noir, a two-screen venue at the crossroads of the Dupont Circle, Kalorama and Adams Morgan neighborhoods, in an attempt to reclaim the small art-house style. Encumbered by debt, it closed in 2004.

Above is the Washington DC Post article itself, not the comments to the article. Here’s another review:

AOL City Guide:
It’s a shame that the theaters that show the most interesting movies in the DC area are also generally the shabbiest and most uncomfortable. The Dupont 5 always has fascinating foreign and independent movies, but it’s cramped and dingy. Its largest theater holds just 139 people; its smallest has 59 seats. The seats are uncomfortable and not especially clean. The screens are small and the sound is sometimes scratchy. The lobby and restrooms are too small to accommodate even a moderate crowd. But Dupont 5 is often the only place in town to see certain movies, and with such small theaters, a popular movie can sell out quickly. You have to wait in line outside not only to buy the tickets, but also to enter the theater if you’re too early. Of course, since it’s in Dupont Circle, there are plenty of places to go if you’re really, really early. This theater has the standard concessions, plus some gourmet fare and coffee. Ticket prices are $7.75, $5.00 for children 12 and younger and seniors 62 and older, and $5.25 for shows before 6:00 p.m. Parking in the Dupont Circle area is a nightmare, and the garage across the street from the theater closes at 10:00 p.m. and is pretty expensive besides. You’re better off with the metro. The South exit of the Dupont Circle station on the Red Line lets you out a few yards from the theater — just go straight when you get off the escalator. The last train for Glenmont leaves at midnight; for Shady Grove at 12:10 a.m. -MS

With the two nearby Landmarks and the Shirlington across the river, I think there’s enough screen coverage for independent films. Besides, the screens at Dupont weren’t special to begin with anyway.

Piddy says Shirlington may close /theaters/15213
It has such a nice looking exterior, judging from the photo.

Nooooooooo! I hope not. Shirlington, at least to me, seems like its better situated. They just built a whole new living complex of apartments, condos and shops. I haven’t been to Shirlington since Jan but the place was rather packed then. It would be a shame if they closed it, but the fact is there isn’t much competition for that type of programming within 10-15 miles.

Shirlington Lease is done in December. AMC has ask the managers where they would like to go. The condo’s around the theatre mite build more in it’s space.

Here is a photo of the cinema taken on Tuesday, January 08, 2008. Although this was a weeknight, there was a quite a number of individuals in line for this eveningâ€™s offerings. This area of DC is just the spot for a specialty cinema. It will be missed.

I only saw one movie here ever, while I was visiting from out of town. It was “Boys Don’t Cry” in 1999. I remember the auditorium having some very poorly-placed structural columns in the middle of the theater, partially blocking the views of some seats.