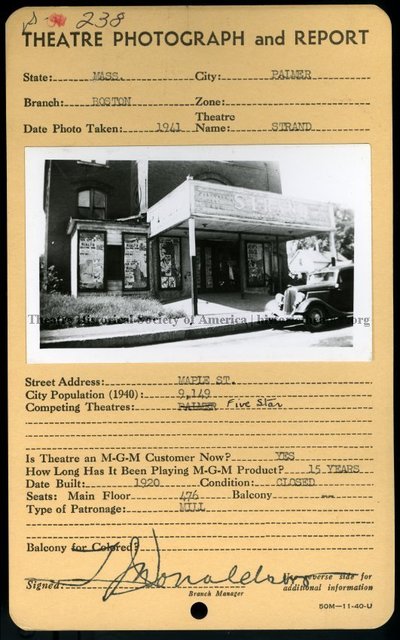 Built in 1920, the Strand Theatre was a small “picture show” in the town of Palmer, in south-central Massachusetts. It was at one time run by Ralph Snider theatres of Boston.

After closing and subsequent demolition, an aparment building was built on the site.

There is a MGM Theatre Photograph and Report form for the Strand in Palmer, with an exterior photo dated 1941. The theatre was at least 2 stories high and had a big marquee that jutted out almost to the street with support posts on its front corners. There are huge poster boards next to the doors. There was a grassy lawn next to the walkway leading to the front doors. The Report states that the theatre is “Closed”, but the entire front is full of movie posters and lobby stills. The Report says that the Strand has been a MGM customer for 15 years; that it was built in 1920 and has 476 seats. A competing theatre is listed as the Palmer Theatre, but someone crossed that out and wrote in “Five Star”. (Was that the new name for the Palmer Theatre?) The 1940 population of Palmer was 9,100. In the 1942-43 Motion Picture Almanac, the Strand and the Palmer theatres are both listed as part of the Ralph Snider theatre circuit of Boston.