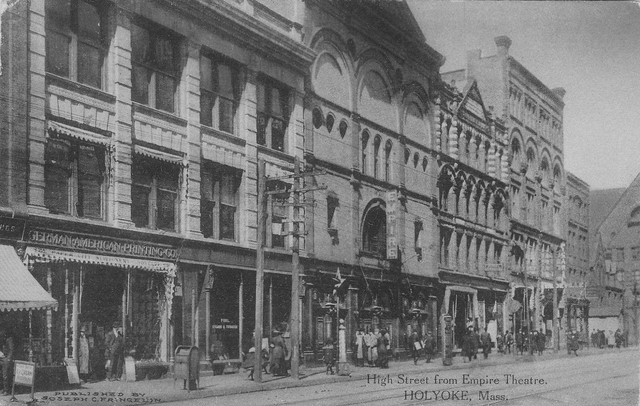 An early Holyoke theatre, located on High Street, north of Dwight Street. The Empire Theatre was opened on November 2, 1893. Apparently it did not make the transition to “talkies”.

The Holyoke Daily Transcript for February 10, 1915 lists the Empire theatre (no address is in the ad) with matinees at 2:30 and evenings at 8:15. The ad promotes an “Engagement Extrordinaire!” Mrs. Leslie Carter, “America’s Finest Actress” in “Du Barry” “—A photo-dramatization of her greatest success —” Apparently this was the filmed version of a successful stage-play that had also featured Mrs. Carter. The ad also indicates that matinee admission is 10 cents and 15 cents and evening prices are 15 cents and 25 cents.

The other theatres listed on this date are the Holyoke Theatre (formerly the Holyoke Opera House and listed elsewhere on this site as E.M. Loew’s State Theatre); The Majestic, The Suffolk, the Granbd Theatrein Holyoke and the Poli’s Palace in nearby Springifield.

The Empire Theatre was located at 147 High St. The Triangle Shoe Store is located there now.

Listed as the Star Theatre in the 1918 business directory.

The Empire Theatre was one of two houses listed for Holyoke in the 1906-1907 Cahn guide. It was a ground floor house with 1,050 seats. T. F. Murray was the manager.

The Empire Theatre was listed (without an address) in the District Police Report for the year ending on October 31, 1913. It was one of eight theaters listed for Holyoke.

The January 22, 1916, issue of The Moving Picture World carried this item:

“Thomas Murray, whose Empire theater at Holyoke, Mass., burned down several months ago, was in Boston last week and announced that he had secured additional land adjoining the site of the old theater upon which he intends to erect a new structure with a seating capacity of 1,800.”

The only mention of the Star Theatre I’ve found in the trade publications is in the March 18, 1916, issue of The Moving Picture World, which says that the Star had just been purchased by Oliver Bernest. The seller’s name was not given.

No theater was listed for the address 147 High Street, or any nearby address, in the 1922 New England Business Directory, which had a total of ten theaters listed. If the Star was indeed the theater built on the site of the Empire, and it had 1,600 seats, I can’t imagine why it closed so soon. Maybe Murray’s rebuilding plans fell through and something more modest was built.

The July-December, 1915, edition of Safety Engineering reported that the fire at the Empire Theatre in Holyoke took place on April 22. The fire, which started at the rear of the stage, caused $50,000 damage.