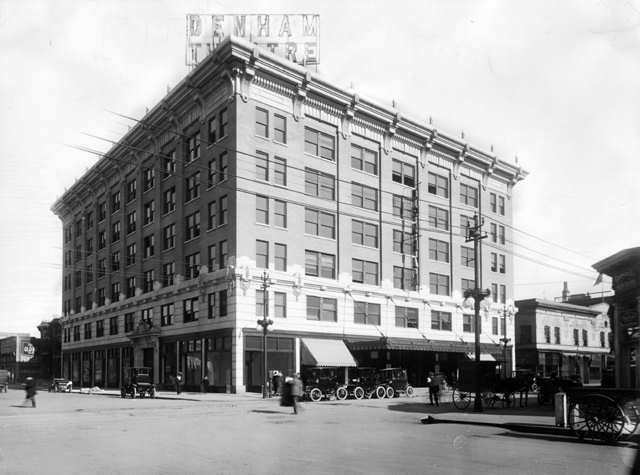 The Shubert brothers, James, Sam and Lee, ran a huge theatre empire from their offices in New York, and their Shubert Theatre opened in Denver in 1913. The name was changed to the Denham Theatre shortly after its opening.

Originally a stage theatre, productions starred the likes of Alice Brady, Gladys George, Mary Boland, Otis Skinner, Marjorie Rambeau, and the famous comedy team of Olson and Johnson. The Wilkes Players, the theatre’s own stock company, leased the theatre for the first twenty years. The Denham Theatre had its own orchestra and musicals, plays and vaudeville routines were a mainstay for many years.

The theatre was entirely fireproof, built of steel, concrete and brick, and seated over 1,660 persons, 200 of those in boxes three tiers high. The interior was finished in shades of blue and gold, with row after row of plush seats. The theatre replaced one of Denver’s Victorian mansions at the site. In 1932 the Denham Theatre was converted to a motion picture theatre.

In its earliest days, the six-story building contained offices for mining, lumber, oil and railroad companies, along with the central offices for the Crown Hill Cemetery Association.

In 1951 the Denham Theatre was given a major overhaul. The boxes were torn out, the blue and gold were replaced with red and chartreuse, and the lobby and facade were completely modernized. New seating was installed along with a new sound system. In the process, much of its former charm was lost forever. But it thrived for the next two decades with first-run features such as Charlton Heston in “Ben Hur” and “Cleopatra” with Richard Burton and Elizabeth Taylor. It closed its doors for good on November 19, 1974, and the building has been replaced with a parking garage.

Here is a photo of the Denham Theater.
View link

The Denham Theatre underwent major overhaul in 1959, not 1951, in preparation for the 70mm Ultra Panavision roadshow engagement of “Ben-Hur”. MGM had much input into the overhaul, including mounting surround speakers in the ceilings in recessed fittings, not in speakers inside cabinets on the side and back walls. Two Norelco DP70/35 projectors were installed and fitted with purpose-built Ultra Panavision lenses. Studio engineers visited the theatre every month or two to tweak the projection and sound. The 12khz surround guide channel was especially troublesome for some reason.

MGM was also most insistent that the title of their movie be spelled “Ben-Hur”, with a hyphen. On the building’s two-sided neon sign mounted on the corner of the building, the letters were altered to read BEN-HUR rather than DENHAM. The hyphen was not neon but two metal plates fastened one on each side between the N and H. Later these letters were altered again to read EXODUS in very expensive blue neon for that movie’s run, then changed back to DENHAM. The hyphens disappeared.

I remember these things because I worked at the Denham as an assistant manager for several months during the “Ben-Hur” engagement, and later visited to get my fix of 70mm roadshow extravaganzas like “El Cid”, a studio preview of “Mutiny on the Bounty”, and “Mediterranean Holiday” which, along with “Windjammer”, seen at the Tabor Grand, pushed me toward my eventual career as a sea captain. Not bad for a geeky kid from Denver.

Thank you William for the interesting and great information on the Denham Theater.

Captain Bill: Was Bob Clark the manager of the theater in 1959? Do you remember projectionists Chuck Weber and Dan Kelly? How about Vera Cockrill (the owner)? If you remember any of these people, please contact me at . Thank you.

This page from the Landmarks Association of St. Louis says that St. Louis architects Harry G. Clymer and Francis Drischler designed the Shubert Theatre in Denver.

The entry for the Colorado-Yule Marble Company in the 1913 edition of Sweet’s Catalog of Building Construction lists the Shubert Theatre Building in Denver among recent projects using the company’s products, and that list also attributes the design to Clymer & Drischler.

Interestingly, the Princess Theatre in St. Louis, also designed by Clymer & Drischler, was built by an outfit called the McClure Construction Company. A Frank P. McClure Construction company was operating in Kansas City around this time, and I suspect that the Denver Public Library, whose photo of the Denham Building is the most likely source for our current attribution of this theater to McClure, mistook the contractor on the project for the architect.

1974 photo added, photo credit & copyright Save the Signs, via their Facebook page of the same name.

Full size 01/25/51 photo and description below added. Credits at bottom.

January 25, 1951-The Denham Theatre, at the corner of California and Eighteenth streets, recently opened a modern coffee bar, which adjoins the theatre. The exterior is of glass and gray flagstone, the interior is constructed of combed plywood walls and has Formica counters in rose and chartreuse, with stainless steel fittings. The restaurant has entrances on both street and theatre lobby. Photo Getty Images Denver Post, copy credit Denver Post.

a few fun facts about the denham – as part of the over one-year run of ben-hur, on 3/8/60 it was announced that the theatre name would be changed temporarily to the ben-hur theatre ! the denham’s last day was 11/19/74. i am currently putting together a series of books on the denver area drive-ins and indoor theatres, including many booking histories. if anyone has any questions about the subject, please feel free to contact me at . i’ll be more than happy to share my research with you. see you at the movies ! – ken mitchell

Motion Picture Herald, Sept. 12, 1953: “The Denham this week is celebrating its 40th year.* Built in 1913 for legitimate plays, the house was also used for years for stock before closing for a time, and then opening for films in 1932, with the late Lou Hellborn managing until Dave Cockrill came in 1934 to manage until his death last year. His widow, Mr. (sic?) Vera Cockrill, now is managing director, with Robt. Lotito as manager, and with Wm. Fitzgerald handling the publicity.”