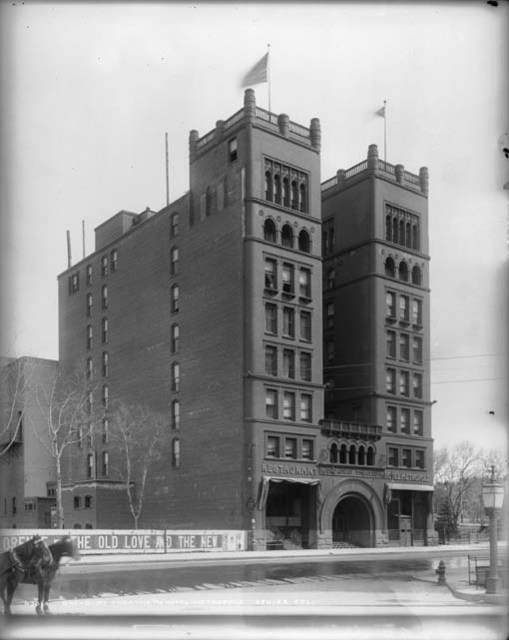 One of Denver’s most respected theaters was the Broadway Theater, part of the nine-story Metropole Hotel, which was built on the block originally owned by Henry C. Brown, builder of the adjacent Brown Palace Hotel. Brown built his fashionable residence on the block, which he later sold to silver king Horace Tabor and his wife, Augusta. The house became the Commercial Club after Augusta’s death in 1895, and was demolished in 1903 to make way for new commercial structures.

The brilliant opening night, August 19, 1890, saw many of the city’s most prominent citizens, occupying the hundreds of seats and the 25 boxes, which were onion-domed and partially enclosed with intricate metal grillwork. The main curtain was painted with an East Indian scene, and the overall decoration of the interior space was so exotic as to raise more than a few eyebrows among the well-traveled patrons. The stage was forty feet in depth and seventy five feet high. Behind the stage were three lofts, a scenery dock and even a portable porcelain bathtub, used for the star’s dressing rooms. The theater played host to everything from grand opera to musicals and high drama, lectures, concerts, vaudeville, benefits and school pageants.

Leasing of the Broadway Theater to the newly formed Metropolitan Amusement Corporation took place in 1932, with plans to remodel the theater space for motion pictures and expanded stage shows. The theater was closed in 1935 for extensive remodeling, and was reopened as a movie theater that same year. After a few years as a first run movie house, both the theater and hotel were acquired by Trader Vic’s, and were again updated. Trader Vic’s, one of the city’s popular taverns, occupied a space that housed the long corridor lobby of the Broadway Theater.

The Broadway Theater, Metropole Hotel and other structures were razed in 1956 to make way for the much-touted Mile High Center, a high-rise office building designed by renowned architect I.M. Pei, at 1700 Broadway, and for the Wells Fargo branch building, at 1740 Broadway.

Here is a photo of the Broadway Theater interior.
View link

This is an undated photo from the Library of Congress:
http://tinyurl.com/39ptu6

There are quite a few photos on the site. Here is a better view of the entrance:
http://tinyurl.com/2rduty

Architect/contractor Colonel J. W. Wood designed the Metropole Hotel and Broadway Theatre with an exterior in a rather austere version of the Romanesque Revival style, but the auditorium, seen in this photo from the Denver Public Library’s L. C. McClure collection, was a lavishly Oriental space, encrusted with decoration.

As the photo is black and white, we can only imagine what riot of color the room must have displayed. William G. M. Stone’s 1892 guide The Colorado Handbook describes the Broadway Theatre as having one of “…the prettiest interiors in The Great West, in luxurious appointments equal to the best.” The description of the Broadway’s auditorium in Andrew Craig Morrison’s Theaters is positively effusive:

“No theater anywhere could surpass the exotic visual display that veteran theater architect J.M. Wood incorporated into its vast auditorium, and few could equal it. ‘A Glimpse of India,’ the scene painted on the asbestos safety curtain, was extended into the third tier for the Broadway’s audiences, who found themselves engulfed in an Indo—Moorish fantasy that surpassed even New York’s extravagant Casino.”

Hi I have this picture is it worth anything