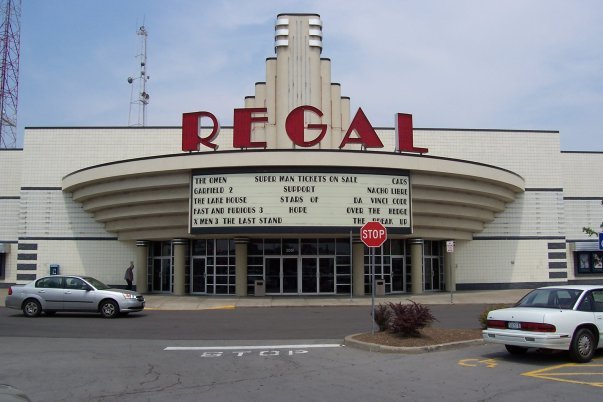 The immediate area was for years mostly industrial lands. A couple of strip plazas appeared in the past few years along with a Home Depot across the street. The Regal 16 was then built on land that had been cleared, next to one of the plazas.

The opening of this theater closely coincided with the opening of Titanic. They really packed in the crowds those first few months as this was the first stadium seating theater in the area as well.

10 are stadium – the 6 back theaters aren’t. Regal came to Buffalo in a big way in 1997-1998 opening Transit Center, Elmwood and Quaker Crossing all within a month or two of each other. 2 years later (I believe) Niagara Falls opened and the area would not see another new theater for some 8 years with the opening the new Walden Galleria Stadium 16. Regal saw an opening a market with no stadium seating theaters and pounced before Cinemark (which had a theater on the drawing board for Hamburg) and AMC had a chance. They did roughly the same thing in 99-2000 in NYC when they ran a big ad in the New York Times advertising 3 new complexes at once – Battery Park 16, Kaufman Astoria, and Columbia Park (at least two of them ended up to be under performers, I assume Regal probably regrets over building Buffalo – – this one really should have been a 12-plex, however they probably really regreat Quaker Crossing, an 18-plex which has to fight with a 6-plex a mile away for product).

Regal has just updated their recliner retrofit listing to include this theatre, and I can only assume that the recliner project has started (as the theatre is currently showing as only having 10 screens operating).