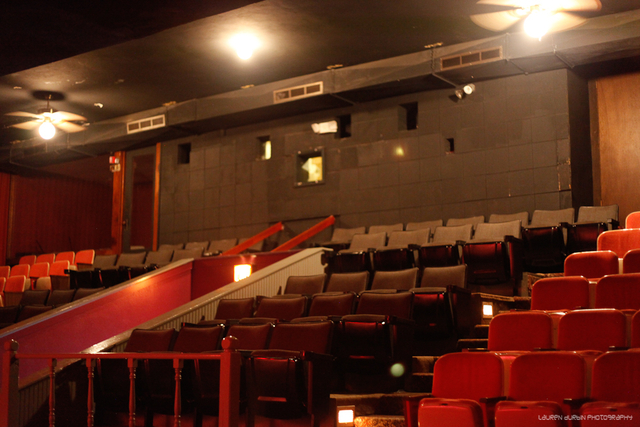 The Bonham Theatre was opened by Universal Pictures on September 27, 1926 with Colleen Moore in “It Must Be Love”. By 1941 it was operated by Paramount Pictures Inc. through their subsidiary A.H. Blank. It had a seating capacity for 897 in orchestra and balcony levels. It was later twinned.

According to the January 26, 1952, issue of Boxoffice, there was also a Majestic Theatre in Fairbury, which had been closed for some unspecified time but was renovated in late 1951 and reopened as the Woods Theatre. The Woods had 468 seats. The Majestic had seated 600. The article said that the house was across the street from the Pla-Mor, but failed to say what the Pla-Mor was. Perhaps it was another closed theater?

In the October 19, 1929, issue of Movie Age, among the theaters listed as having been purchased by Publix are three at Fairbury, Nebraska: The Bonham, the Majestic, and the Rex.

This theater was twinned by closing off and soundproofing the balcony. The original wall lighting can be seen in the upstairs auditorium as well as the original balcony railing. The original projection booth is used for this auditorium. The main auditorium is still quite large with a gently sloped deck , widely spaced rows, large screen and high ceiling. The theater also has a nice DTS sound system. Entry in the downstairs auditorium was relocated to either side of the auditorium to accomodate the addition of a second projection booth at the center rear of the theater.

The original architect was Ed Hopper of the firm Busboom Bros. Architects and said to be in attendance at the Bonham’s grand opening. Taking over by Tri-State Theatres which obviously ran Paramount product.