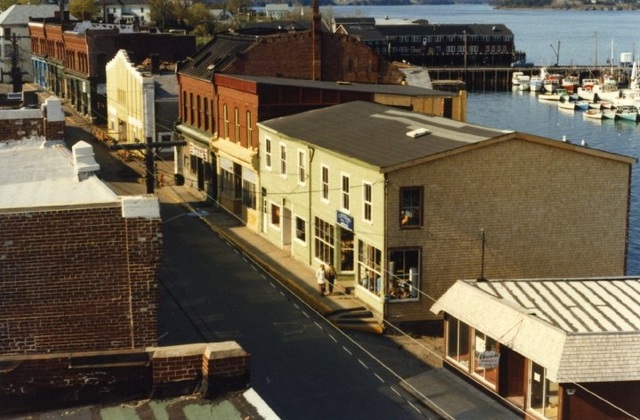 The Wilbor Theatre was located in Eastport, on the coast near the New Brunswick border. It opened March 16, 1942 with 750 seats. The opening movie was “Bahama Passage”. It was closed in 1972 when the wharf it was located on collapsed into the sea.

I have done a bit more research on the Wilbor Theater in the softbound book titled The Island City, A History of Eastport, Moose Island, Maine by John ‘Terry’ Holt, published in 1999 (Eastport 200 Committee). Wilbor A. Shea, an insurance salesman started up the Acme movie theater in 1908. He began showing films regularly in the Memorial Opera House, located on the top story of Memorial Hall (built in 1869) on Boynton Street, in 1908 in competition with his first theater, the Acme. Shea spent a lot of money remodeling and renovating the Memorial Opera House and two days before its grand re-opening, the building was consumed by fire in January 1913. The lower floor contained a primary school. In 1915 Mr. Shea bought the Star Theater, which had opened in 1912 over the Roseland dance hall in the Frost Block on Water Street. Shea renamed the Star, the Toy Theater. Willy Hicks and his son Harold ran the Toy Theater for Shea. When the Toy Theater closed in 1917, admission was a nickel. A William Tooze built the Imperial Theater in 1915 at the corner of Shackford and Water Streets. His children assisted. Steve Tooze was pianist. Frances sold tickets. George collected tickets. Joe played drums. The films changed daily and often there were vaudeville acts from Saint John, N.B. Shows ran every day except Sunday. Mr. Tooze sold the Imperial to Armando Conti in 1921. Conti ran it briefly before selling the Imperial to Wilbor Shea, who died in 1926. After Mr. Shea’s death, his wife Nellie continued to operate the Acme and the Imperial. The Acme, the Red Men’s Hall and the Market Wharf Building were destroyed by fire on Nellie Shea’s 81st birthday in March 1941. She had closed the Imperial for renovations and new equipment, but was able to re-open it two weeks after the Acme burned down. On the site where Red Men’s Hall and the Acme had stood, Nellie Shea began construction on a new, modern theater to be called the Wilbor, obviously named for her late husband Wilbor A. Shea, and which would seat 750 patrons. The Wilbor Theater actually opened on March 16, 1942, notwithstanding my first comment in which I noted that Capt. Lank of Campobello was in attendance the opening night. He was undoubtedly one of the first patrons. The feature film when the Wilbor opened was ‘Bahama Passage’. One hundred people stood at the back of the theater to see the first show. Three hundred more stood outside in the street for the second show. When Nellie Shea died, her much younger sister Marjorie Nutt took the helm. Madge was a most assiduous theater manager and possessed quite a sense of showmanship. She would personally go to Boston to cajole and dicker with the distributors at the booking houses and convince them that she ran the finest movie theater north of Boston. Consequently, she felt she deserved to have her Wilbor Theater get top billing. More often than not, films would play weeks and months before they did at the Bangor theaters. Madge did not countenance anything but the highest quality feature film. Whatever was left of the Wilbor Theater after it and its wharf collapsed into Passamaquoddy Bay in the Nor'easter of Groundhog Day in 1976, was torn down in 1980. At the moment I am unable to offer a precise date for Marjorie Nutt’s death.

The comments posted above by Thomas H. Moore III constitute as fine a history of a small-town cinema as I have ever read anywhere.

I, too, worked at the Wilbor Theatre in Eastport, Maine, while I went to Shead Memorial (class of ‘66)and Madge Nutt was still the owner/manager. For two or three summers, which were the only times it was opened since it had no heat, I worked in the concession stand for a percentage of the take and the ability to see the movie once I closed the stand for the afternoon or evening, which sometimes was relatively early if there weren’t many patrons, especially during the week and during cold snaps in the weather. My family was also allowed to attend the movie occasionally for free as long as I worked there. Madge was a real sweetheart to me and I liked working for her even though I made very little income. It was a great place to keep in contact with friends in the summer. I wonder how much Madge actually made by running the movies for us by that time since she still only charged .35 for the matinee and .65 for the night show and from her “profits” she paid to stock the concession and pay the projectionist. I sometimes think she only did it to provide the younger generation with something to do and because she liked young people in general. She sold the tickets to the movie and maintained order if anyone got rowdy even though she was getting on in years by this time.

By the time I worked there, the red velvet seats were worn and some were damaged, and, as I said there was no heating for cold days, but I really miss seeing the old theatre when I come home, despite the beautification to the former site. It was a part of my history and my home. I have my own memories and the memories that were passed on to me by my parents — like the time my father sneaked out behind the theatre to smoke and a whale surfaced and blew on him.

My first memory of going to the movies was at the Wilbor at night with my parents and sister and of the fog rolling in, and believe it or not I still remember that the movie was “Gypsy Colt.” Does that date me, or what? This was shortly prior to my father leaving for Korea.

An item in the “Rep Ripples” column of The Billboard for January 3, 1942, mentioned the new theater under construction in Eastport, Maine, that was to be named for Wilbor A. Shea. It said that Shea had for many years had dramatic repertoire troupes traveling through Maine, New Brunswick, and Nova Scotia.

A 1911 book called Monarchs of Minstrelsy, from ‘Daddy’ Rice to Date" (scan at Google Books,) by Edward Le Roy Rice, has this biographical sketch of Wilbor Shea’s father, who was also in show business:

“Pete Lee (Shea) was conceded to be one of the greatest tambourinists in minstrelsy; as a comedian, he was excellent.

“As early as February, 1858, he was touring with Pete Lee’s Empire Minstrels.

“He joined Buckleys Serenaders in the 6o’s, and continued with them for several seasons.

“August 28, 1871, he made his first appearance in Philadelphia, as a member of Simmons and Slocum’s Minstrels.

“He was also prominently identified with the companies of Morris Brothers, and Sharpley’s. In 1872 he opened Bishop’s Opera House in St. Johns, N. B., renaming it Lee’s Opera House, and conducting it for several years.

“His last professional appearance was about 1878.

“A son, Wilbor F. Shea, is manager of the Memorial Opera House, Eastport, Me.

Every time I visit Eastport with my now 80-something father he recounts seeing “Gone with the Wind” at the Wilbor with his older brother.

The read Mr Moores comment None of the wilbor theatre was lost to the storm but some of the roof. This is why the owner at the time a gentleman from Conneticut decided to tear the building down.