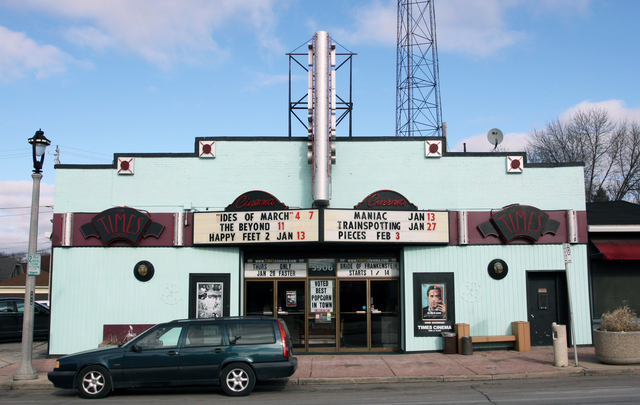 The independent theatre was bought by Levin in 1993 from the Marcus Corporation and has remained a single screen cinema. By 2019 screening first-run movies.

This opened on June 17th, 1935
They did not have much money for a large ad at the time.
first directory ad is at View link

The land was purchased in 2007 at the height of the ‘real’ estate bubble, and now there is now way the bank will help them recover. I have been to both many times. :(

Former owner Jay Hollis has been hired to manage and keep the TIMES and ROSEBUD open while a search convenes for a new owner. AnchorBank of Madison had foreclosed on the mortgages, but the bank said today that the theaters will remain open. Hollis, a former painting contractor, created the Rosebud in 1999 after redoing the former Tosa Theater, and sold it in 2007. After owner David Glazer said the two theaters would close during the first week of March 2012, AnchorBank spokesman Timothy Carter said Hollis was hired by Siegel-Gallagher, the court-appointed receiver of the properties, to begin operating the theaters beginning March 1 throughout receivership while a new owner is found. Byron Butler, the senior vice president of marketing at AnchorBank, called Hollis “the original visionary” and said it was appropriate to continue operation with him.

The other theater in this group, the Towne in Watertown, WI, has been dropped from the website and the phone has been disconnected.

This theater and the Rosebud have been closed; reopening depends on a successful resolution of their financial problems. View link

The Times reopens on Friday, December 28, 2012 at 6 PM with a floodlight and a red-carpet runner after being dark since March when its lender began foreclosure proceedings. New owner Lee Barczak bought the Times at auction in May, and on Sunday, December 23 he announced details of the Times' reopening ceremonies, which will feature “Django Unchained” at 7:30 PM.

I now live one and a half blocks from the Times and can see it’s Marquee lights from my front window. I am happy to say it has been remodeled and is showing first run films again. The owner has also remodeled his two other theaters the Rosebud in Wauwatosa and the Avalon on the south side and they are also showing first run films again. All three are small and very comfortable.