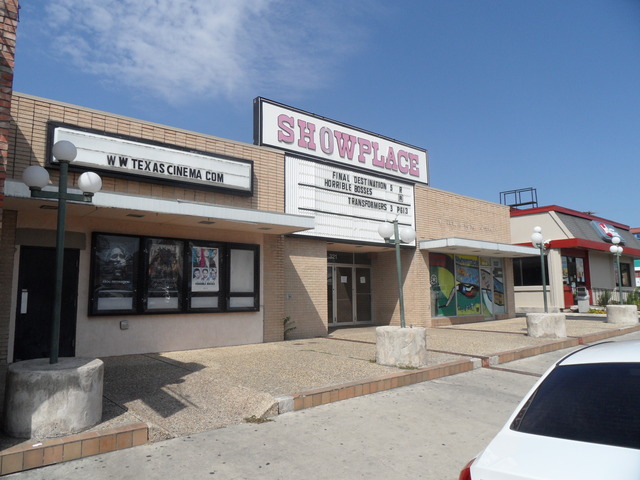 Was originally owned by Lone Star Theatres but is now owned by Texas Cinema. They have 25 screens in 3 theaters in Texas. The Showplace Cinema was closed in 2015.

Had two screens when “The Great Waldo Pepper” was held over there in April 1975. Apparently part of the film was shot (at the Hays County Fairgrounds) in San Marcos.

Often on Sunday’s they would run Spanish speaking movies such as:“LOS CACIQUES”.Several showings during the day in Cinema 2.

From 1998 to 2000 I ran projection and was assistant manager of the Showplace for a time. It was run as a $2.00 discount theater most of the time I worked there. The little screening room was neat and I remember it was hard to squeeze around the platter system to thread the projector. The seats at the showplace were more confortable than most and had a nice spring to them. Unfortunately I also remember customers abusing them and several were damaged and still had no been repaired by the time I had left. I also had the pleasure of working at the 5 screen theater at San Mar Plaza before it was gutted and converted into what looks like is a Dollar General. I think I still have some pictures of the process of removing the projectors from the booth that ran the central length of the building. I have fond memories of those days.

I am sad to report that the Showplace 3 has been permanently closed. I grew up in San Marcos, and I remember the time when it was the premier theater.