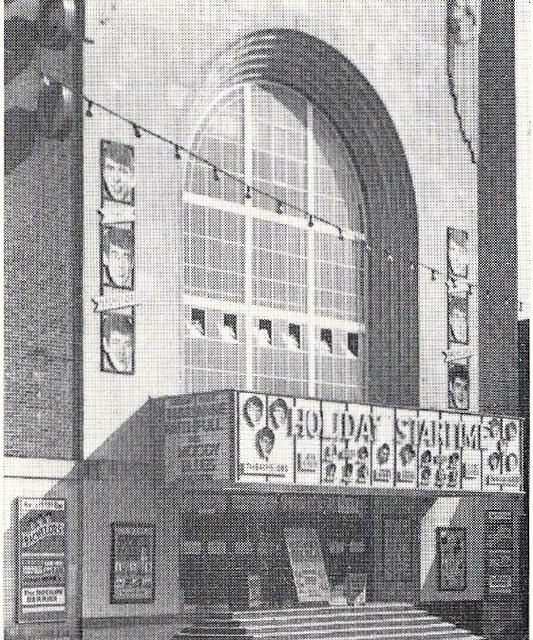 Built on the site of the Theatre Royal. This was a fantastic structure built as the Regal Cinema which opened on 1st January 1934 with Charles Laughton in “The Private Life of Henry VIII” and James Murray in “The Air Hostess”. Film star Merle Oberon made a personal appearance. It boasted a Compton 2Manual/5Ranks theatre organ. It ran mainly as a cinema but also because of it’s size hosted various stage shows and pop concerts, especially in the summer months when this seaside town was packed with holiday-makers.

Taken over by Union Cinemas in 1936 and operated by Associated British Cinemas(ABC) from 1937, it was operated for the last couple of years of its life by the Cannon Cinema Group and was re-named Cannon Cinema. It closed in late-May 1988 with Eddie Murphy in “Eddie Murphy Raw”.

A real loss when with very little fuss it was demolished and in it’s place a fast food outlet, card outlet and charity shop were built.

This cinema is in the county of Norfolk.It opened in 1934 and closed in 1988 and had 1500 seats.It was located on Regent Road but don’t know the number.

Opened on the site of the Theatre Royal in 1934, the architects were F Howard and T Darbyshire of Yates Cook & Derbyshire, as an independant, taken over by Union Cinemas in 1936, then ABC, renamed ABC in 1961,used extensively for summer shows,(the Beatles and many other pop stars appeared there) renamed Cannon and closed in 1988 as it was a difficult theatre to turn into a multiscreen operation.

Some older photos of the “Regal” as it was always known, shame it has to be listed as Cannon an insult to cinemas everywhere.

Yes I understand. I cannot stand the name of Cannon ABC Walsall is refered to as a Cannon (Sick bag time)

Interior photo from the ABC being stripped out for demolition (I was there unfortunately) perhaps someone can put the photo in the photo section. I have been looking for years for and interior photo.

The name ‘Cannon’ looked and sounded repugnant and I remember the sinking feeling I experienced when I heard that they had taken us over via ‘the back door’…..

I was manager of ABC Newcastle at the time and we were the last cinema in the country to have the name changed as there was a problem with access from the busy main road.

During the period leading up to this I heard that they were about to go bust and I thought that we may not, after all, have to suffer the indignity of being known as the ‘Cannon’…..sadly, they got through their latest financial catastrophe and we did have to have their nasty cheap signage attached to the building.

What a bunch of unprofessional ‘cheap jacks’ they were!

Re Cinema Treasures' policy of listing cinemas by their final names, it is unfortunate for those which bowed out with that horrible name and the derision and contempt it aroused in ABC Managers and the industry in general………..

@ Terry. I am ex ABC (Started in Sir Phillip Walters time..) I agree with you.. “Cannon” the worst name in Cinema..

The Regal was built on the site of the Theatre Royal, which was proposed to be rebuilt as a theatre, but instead of course, the cinema was built, with stage facilities instead. The Theatre Royal has film use prior to demolition, a projection box being added in latter years.