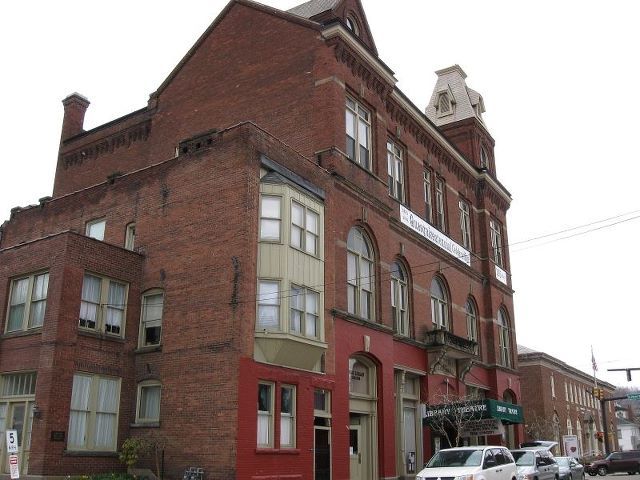 Originally opened in 1883, it served as a library and Victoria opera house. In 1919, the space was gutted and fitted out to become a movie theatre, with Keith vaudville acts on the stage. It closed as a full time movie theatre in 1980.

It was renovated in 1982. I saw several films in this beautiful theater in the 1960’s. It has since become a community theater.

Here is an undated photo:
http://tinyurl.com/2u3b2r

A fundraising campaign to restore and improve Warrenâ€™s 125-year-old â€œcultural jewelâ€ began Wednesday evening. Eighty people were at the Struthers Library Theatre to hear details of the 125th Anniversary Fund Capital Campaign, which has a goal of $1.25 million. Executive Director Marcy Oâ€™Brien described it as something â€œwe all personally believe in and that is worthy of our support.â€ She said the list of restoration work and improvements â€œis not a wish list, but an opportunity to become a big, grown-up theater.â€ Exterior work will include painting, mortar repair, repairs to the roof, wooden turrets, tower and gables, and cleaning of the limestone. Interior work will include an elevator to the mezzanine and Library Room, a new heating system, repair plaster and carpet that has been water damaged, finish replacement of windows, refinish wood floors, upgrade the kitchen in the Library Room, and replace old office equipment and carpeting. Oâ€™Brien also emphasized the need to improve handicapped accessibility in the back three rows of the theatre. She said â€œby taking out some of the seating and putting in accessible seating for seniors as well as handicapped, it will make it will make it a more enjoyable experience for them.â€ â€œThe elevator is also a must because it is limiting the use of our beautiful room upstairs for not only seniors, but also for caterers that do not want to haul food up and down three flights of stairs,â€ she said. Oâ€™Brien also talked about the 125-year-old, wooden 50-foot â€˜fly systemâ€™ onto which curtains and large lights plus pulleys used to lift actors and props are attached. â€œProfessional acting groups do not want to hang valuable sets as well as actors on unsteady equipment,â€ said Oâ€™Brien. â€œWe have had some amazing shows here in the past and I know that we could have the best talent come if we had a steel grid support.â€ â€˜Intelligentâ€™ lights are also needed, said Oâ€™Brien, noting that the current equipment hasnâ€™t been replaced since the Centennial Campaign in 1983. â€œThe programmable lighting and follow spotlights will allow us to simply type up where the lights need to be and stick the disk to the computer,â€ said Oâ€™Brien. â€œIt will relieve the headache of trying to repair the old lights.â€ Co-chairpersons on the fund-raising campaign are Howard R. Ferguson Jr. and his wife Ann. â€œThe Library Theatre is not only a springboard for our young, but also for our not-so-young,â€ said Ann Ferguson. â€œIt is also not simply just a place for acting, but also a place to learn music, improvisation, costume and set design, writing skills as well as dance techniques. Itâ€™s a home to many acting groups both professional and non-professional.â€ Howard Ferguson said the Library Theatre defines the Warren community â€œin a positive fashionâ€ and brings â€œdefinition to the community.â€ â€œClearly the Library Theatre speaks for itself,â€ he said. â€œIt is just one of the venues that makes Warren County the great place that it is. It is a cultural jewel.â€ Oâ€™Brien said the Capital Campaign committee will take approximately nine to ten weeks to gather three-year pledges. She said persons with questions about the campaign or would like to make a donation can call the theatre office at 723-7231. Culmination of the Capital Campaign will be marked with a gala celebration at the theatre on Saturday, Oct. 18.

Patsy, maybe you know the answer to this question. My aunt played Nellie Forbush in South Pacific with the Warren Players sometime in the late sixties. I was a child at the time. I seem to remember the presentation being at the Library Theater. But I know that the theater was primarily or exclusively a movie theater at the time. Were plays presented here occasionally in the sixties, or was it more likely that the presentation took place at the Beatty or Warren Area High School auditorium?

Steve Ebner: I am not a former or current resident of Warren PA so I don’t really have the answer to your question. I would suggest that you contact the Struthers Library Theatre as they might be able to help you or know of someone who can. Last Fall I did attend an event that was a local talent show to raise money for the theatre. Afterwards refreshments were served on the second floor former library area which has been completely restored.