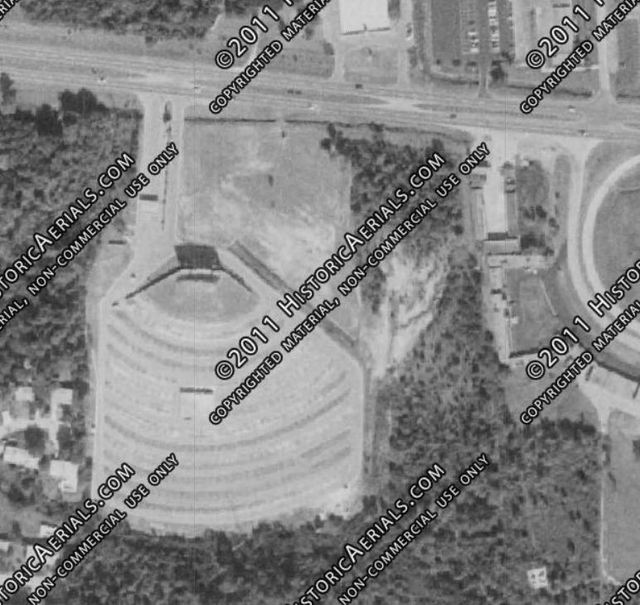 A Walmart has replaced this drive-in. Was owned by Eastern Federal Corporation. Had a capacity for 800 cars. Was still a drive-in in 1983 when it was used as a location for the horror movie “Blood Red” aka “Slasher”, aka “Nightmare at Shadow Woods”.

Troy,didn’t you find some old pictures/news clippings of when it opened back in the ‘50’s.Didn’t you tell me that Maralyn Monroe cut the ribbon on it when it opened?At any rate,I worked there too,part time and was really fond of it.I think the last movies I ran there were Blue Thunder on one screen and House of 1000 Pleasures on the other.

I have some super 8 films somewhere that I shot of the place during the daytime just before it was demolished.

I’m assuming you guys where there when they shot NIGHTMARE AT SHADOW WOODS aka BLOOD RAGE?

My family has very deep roots with a lot of Jacksonville’s drive ins in the 60s and 70s. My favorite is the Midway. I loved that place. I have no pictures of her and would love to see if you located any of the films you took. I would like to e-mail you some how so we could talk more.

Newspaper ads for films that played at the Fox and Midway Drive-Ins and theater times
here.

The above address will map accurately to the location of the drive-in, which is now another Wamart monstrosity.

Here is a 1970 aerial photo of the drive-in, courtesy of HistoricAerials.com.

I grew up in the Windy Hill area of Southside Jacksonville and remember the Midway drive-in very well. It was the place to go on a week night especially if you had a date, for less than 5 dollars you could get in buy a drink and popcorn and you were all set.Sure miss that experience.

Super 8 footage of the closed drive-in, days before demolition: https://www.youtube.com/watch?v=gOQp7QUPiRg

When Eastern Federal twinned both the Fox and the Midway Drive-In, they installed AM Carrier Curent Sound and removed the speakers from all but the last few rows, you know the ones, the rows that the trunk slashers let their cargo out, and the rows with the rocking cars. They remained first run through the early 80’s. Then switched to the “B” movie, Zombie, Slasher soft core format. By 1984 they were Dollar Theatre running second run movies. They did out live the Midway Drive-In, which closed in mid 1984. The Fox closed not long into 1985, thus ending Eastern Federal’s Drive-In operations in Jacksonville, FL.