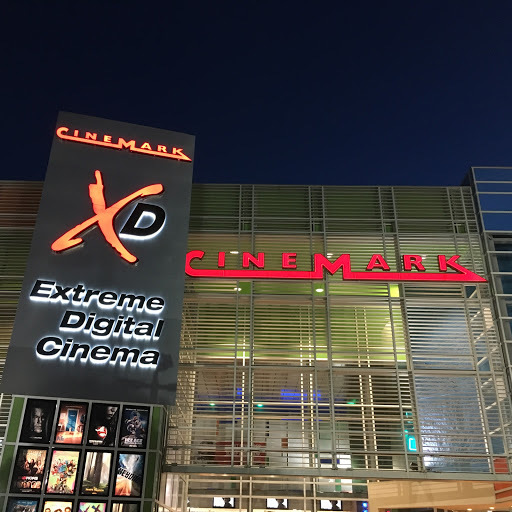 Opened in December 2002 by Rave Motion Picture Theatres. It was taken over by Cinemark in June 2013.

This is part of a July 2002 article in the Arkansas Business Journal:

So in March, Smith, 32, opened Market Street Cinema in Little Rock to showcase the thought-provoking independent and foreign films that rarely show up at the multiplex.

Smith’s move was the first indication that the movie theater business is making a comeback in Arkansas after a wave of bankruptcies by national chains a couple of years ago.

Smith is being followed by Rave Motion Pictures of Dallas, which plans to open in December an 18-screen theater on 15 acres on the south side of Col. Glenn Road, just west of Interstate 430.

Rave officials won’t say what the cost of the project will be, but the company spent $3.7 million to buy the land, and the building permit filed with the City of Little Rock shows the building will be 95,000 SF and cost about $8.2 million.

Fueling the resurgence of movie screens were record box office receipts in 2001, when ticket sales in the United States reached $8.4 billion. With hits such as “Star Wars: Attack of the Clones” and “Spiderman” in theaters now, the record could be broken again this year.

Don Burchett, president of the Arkansas chapter of the National Association of Theater Owners, said he didn’t know of any theaters other than Rave’s under construction in the state.

Looks busy at this streetview at View link

As a student at Harding in Searcy, any time we wanted to see a “real” movie, we’d make the 50-minute drive to the Rave. The Searcy Cinema 8 is notoriously lackluster and also happens to be owned by the Matt Smith mentioned above.

In Searcy, everyone calls him “Slick.”

This is my favorite cinema in Little Rock and I’m excited to see they are adding (or modifiying an existing house)to RaveXTreme-Big Screen Experience. Their website says they will open with MIB3 on May 23. WOO HOO!

This theatre has been rebranded as “Cinemark Colonel Glenn 18 and XD.” An updated photo has been uploaded. It is also currently undergoing a conversion to Cinemark Luxury Loungers in all auditoriums.

It’s somewhat strange that Cinemark owns the Rave brand, took all the time to include in under their Cinemark/Century/Tinseltown logo, but are not rebranding many of the buildings. Did they just get a good deal on Cinemark logo signs?