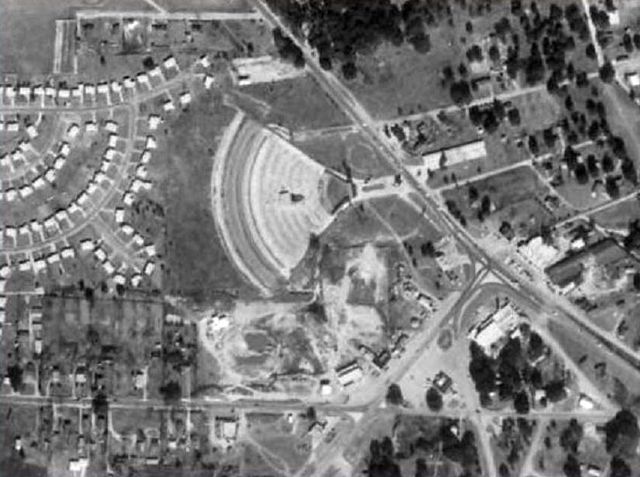 Pensacola’s first drive-in theatre opened June 6, 1941, featuring the 1938 movie “Army Girl” with Madge Evans and Preston Foster, long with a Three Stooges comedy short. It opened as the Drive-In Theatre and was owned by Saenger Amusements who also owned the Isis Theatre in Pensacola at that time. Johnny Jones, the Isis Theatre manager was the manager of the new Drive-In Theatre. Saenger Amusements was transformed into Paramount-Richards Theatres Inc. Paramount-Gulf Theatres (successor of Saenger Amusements and Paramount-Richards Theatres) would be the last owners. The car capacity was 375 cars, which later increased to 500 cars.

The Drive-In Theatre featured outside seating for 400 movie-goers who viewed movies on a 42-47 foot screen tower. An added feature of the Drive-In Theatre was in-a-car speakers. It was one of the very first drive-in theatres in Florida to have them. At that time most drive-ins were using large blast or ground speakers. After World War II started the theatre was closed for a short time due to a ban on pleasure driving in the Pensacola area. After the ban was lifted, it was reopened February of 1943 by Paramount-Richards Theatres.

On January 3, 1951, the name changed to Highway 90 Drive-In. In 1955, Pike Booking from McComb, Mississippi, was the operator. For some reason it was closed for good in September 1956. In January 1959, the screen tower caught on fire at the closed drive-in causing $30,000 of damage. The property sat empty for many years and was finally redeveloped into retail.

The Three Stooges short was called “Tassels in the air”. There was also a championship fight(boxing?) screened between Lewis vs Baer.