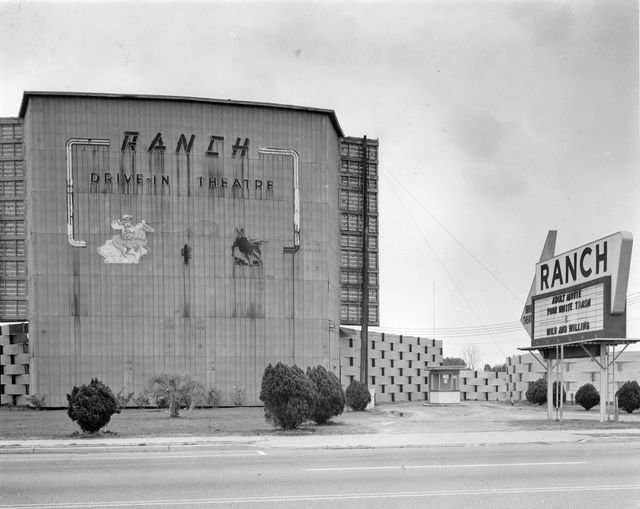 The Ranch Drive-In opened October 15, 1952, featuring “Big Jim McLain” with John Wayne, Nancy Olson and James Arness. It featured a parking ramp that could hold 400 cars, which was expanded in 1955 to hold 500 cars. It was opened by Jimmy and Charlie Tingas. In 1963, T.G. Solomon’s Gulf State Theatres were listed as operators.

The Ranch was notable in the mid-seventies for showing mostly R-rated ‘skin flick'double features.It had a giant,neon cowboy on a bucking bronco sign on the back of the screen-which was facing Pace Blvd. The google map and photo here are not correct…the theater was on the right,as you are going north,almost to Fairfield Drive…near what was the Sandy’s hamburger joint. I’m sure it was still open till at least the end of 1977,or early 1978…because I saw the Incredible Melting Man there..twice!

Above address is incorrect. It was further south. Approx. address for this drive-in was 2816 N. Pace Blvd. The entrance was next door to the pawn shop at this address.

Some ramps are still visible behind the shop.