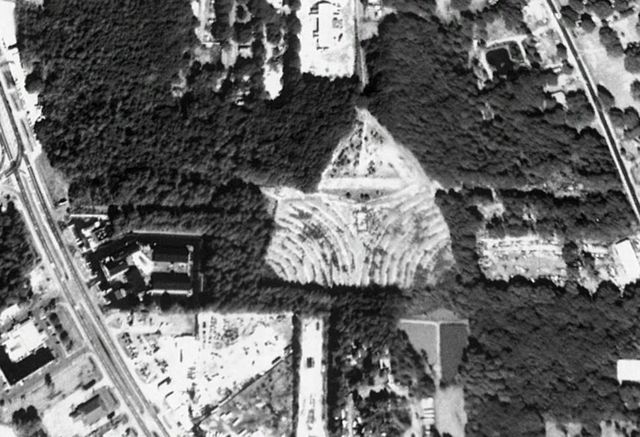 The Showtown Drive-In opened on October 26, 1972, featuring on screen 1, the 1967 comedy-drama “The Graduate” with Dustin Hoffman, Ann Bancroft and Katherine Ross". Screen 2 delighted patrons with the 1972 drama “Kansas City Bomber” with Raquel Welch, Kevin McCarthy and Helena Kallianiotes. The Showtown Drive-In was opened by T.G. Solomon’s Gulf States Theatres. It was designed to be a triple screen drive-in theatre, but was only set up to be a twin-screen at the opening. A third screen tower was planned but it was never installed. If you look at the aerial view, you can see where it was going to be located at. Just with the two screen towers, the Showtown Drive-In could park a total of 700 cars.

It was operated by Cobb Theatres at the end, and closed around 1984. It is now used as soccer fields.

My earliest memory of going to the Showtown was 1977- saw Cinderella 2000.I had a friend at the time named Jay…his sister was married to the manager and I remember he had done some editing to the movie because he was afraid it was too dirty and he’d get busted. In the early 80’s they had a showing of that old chestnut-‘Poor White Trash’ on a double feature with ‘Poor White Trash 2’,I think…using the same ad campaign I had been seein since I was a little kid!–‘due to the controversial nature of the film…uniformed police will be on hand to supervise admissions’.Well there were no police,but there was a line about a mile long!They packed the joint!

There’s some misinformation in the listing here. The Showtown was open through at least 1984. The last film I remember seeing there was Breakin' 2: Electric Boogaloo. Also, if you look at the ads featured on this page in the photos, one of them features the films Vice Squad and Pranks, both of which were released in 1982.

Thanks for letting me know..I will check into that.