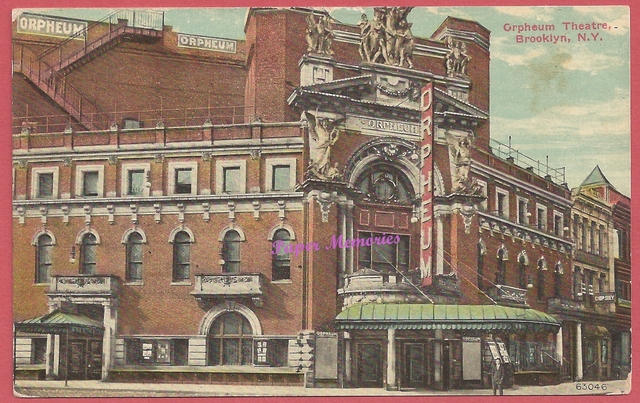 It was demolished in 1955 and for several decades was an empty plot of land, used for parking. In 2013 a new building was being constructed on the site.

This theater stood a block east of Flatbush Avenue on Fulton Street, diagonally across from the Stand and the Majestic. Now it’s a parking lot for the BAM Harvey Theater (formerly the Majestic).

I recently learned that this was an RKO house.

Up the block was the Montemartre (aka Momart) a small theatre which opened in 1927 at 590 Fulton Street. The Momart was opened by Warner Brothers and featured foreign films for its' 26 years as neighbor to the RKO Orpheum. This area of theatres came about in the early 1900’s as the turn of cenyury theatres of the 1860’s started to move away from Brooklyn Government Buildings now Cadman Plaza. The movie palaces where in the proximity of Flatbush & Fulton Streets. Brooklyn’s Times Square was just as impressive as New York’s. How 12 theatres in the area boasting over 40,000 seats survived the depression is just how important movies and theatres were a fabric
of society during the 1930’s and ‘40’s.

The site is now a parking lot.

This appears to be a 1905 photo of the Orpheum, when it was clearly one of Brooklyn’s most magnificant theaters. Enjoy – and also survey other puctures of Fulton St. in this attachment.

Philip J. Smith, who entered showbiz as a teen-aged usher at the RKO Orpheum and eventually became chairman of the Shubert Organization, has died at 89 from complications of Covid-19. Obituary can be viewed here