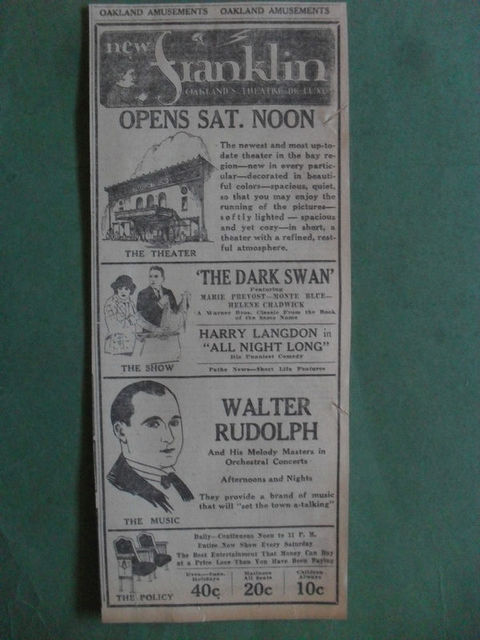 This theater (not to be confused with the later Franklin Theater (q.v.), called “the temple of motion pictures”, was built in 1914. The architect was Chester H. Miller.

Built specifically for silent films, pipes for the Kimball organ flanked the screen.

It was demolished in 1928 to make way for an extended 15th Street (which at the time only went as far as Franklin Street).

The exterior was Egyptian in style. The interior perhaps can best be described as Beaux Arts. To my knowledge, this was the first Bay Area theatre to exhibit motifs from ancient Egypt in its architecture. Others eventually followed, including Oakland’s Parkway (operating), Dimond (gutted, now a market), Allendale (converted to apartments), and Theatre #3 added to the Grand Lake (operating).

Here is a 1916 ad from the Oakland Tribune:
http://tinyurl.com/rylxyu

Here is an advertising card from the Franklin Theatre for the 1917 film EVEN AS YOU AND I:
View link

There is a brief article with a photo of the Franklin Theatre in The Moving Picture World, issue of March 4th, 1916.