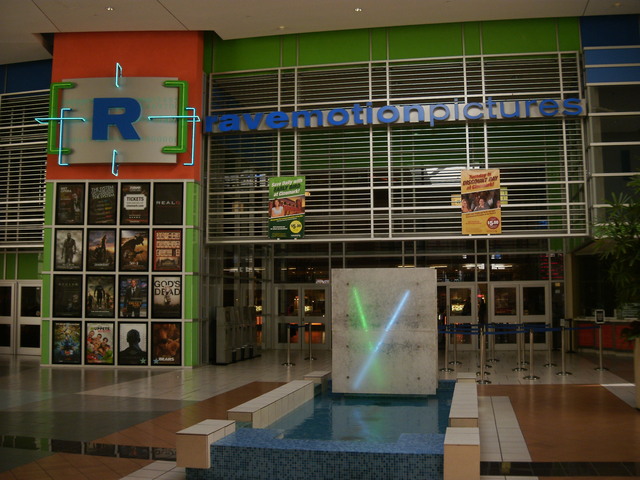 Opened December 17, 2003 by Rave Motion Picture Theatres. In June 2013 it was taken over by Cinemark.

Ridgmar Mall opened April 7, 1976. Its movie theater was in the adjacent Ridgmar Town Square built in 1986 and was opened by General Cinema on New Year’s Day 1987. Like many malls after its 20th anniversary, retailers bolted after their 20 year leases were up and the mall was leaning toward greyfield status, a term akin to a dead mall. So a major revamp was undertaken in 1997 to bring in new retailers and concepts. Among them was to be AMC Ridgmar which announced in 1998 that it planned to build a 20-screen megaplex theater. That 4,000-seat megaplex would have had stadium seating and a lobby overlooking an expanded food court under a vaulted glass skylight and was to be the centerpiece of the next 20-years of the mall. The $70 million stunning redevelopment took place without AMC as the mall had a Grand Reopening on July 21, 2000.

On October 5, 2000, all of the remaining General Cinema Tarrant County theaters were closed including the Ridgmar Town Square along with the Arlington Park Square and Bedford’s Central Park. AMC still planned to open a downsized 16-screen theater in the Fall of 2002 at Ridgmar. In the interim, the external movie theater was reopened by the Great Texas Movie Co. circuit rebranding the theater as the Ridgmar Movie Tavern. And Ridgmar finally got its theater but in the form of a Rave Theater.

The Rave Motion Pictures Ridgmar 13 opened at 12:01 a.m. December 17, 2003 with three sold out showings of “The Lord of the Rings: The Return of the King.” The $15 million, 62,000 square foot theater would be the first megaplex in western Fort Worth with stadium seating, digital sound, wall-to-wall screens and 4 feet of room between rows. At opening, the auditoriums were sized from 120 seats to 420 seats each. The Design International architected theater opened as DFW’s second Rave theater behind only its first theater, the Hickory Creek. The theater’s digital capabilities allowed for expanded Real-D 3D showings, live Metropolitan Opera simulcasts and a variety of Fathom concert events.

The Cinemark chain acquired all of Rave’s properties in 2013 and divested the flagship Rave in Hickory Creek which was forced to rebrand under Carmike operation. But the North East and Ridgmar Mall properties would continue under the Cinemark-owned Rave nameplate. It would add the Cinemark-branded Xtreme “Big Screen Experience”. Under new mall owner GK Development, the mall was in the throes of a mild descent that would be hastened by a new shopping mall opening in 2017 to the south which would take away the anchor Nieman Marcus so it was unclear how bright a future the popular theater would have heading into the 2020s.