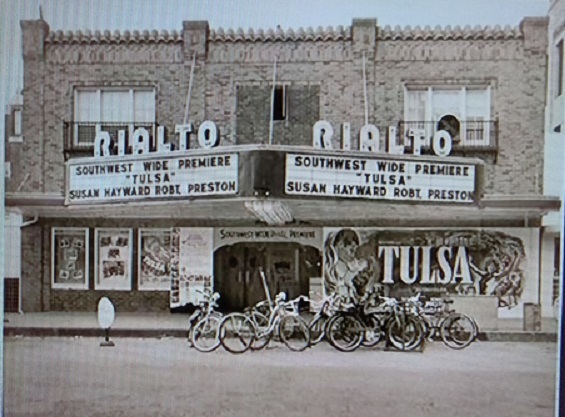 Opened as the Normana Theater on September 11, 1928 with Jack Holt in “The Water Hole”. By 1937 it had been renamed Rialto Theater. The Rialto Theater was last occupied by the Coca Cola company. By 2011, it was in use as offices for the City of Cuero.

You can have a lot of fun on this by typing in words like ‘drawing’, ‘architecture’, ‘theatre’, and such …

The Rialto opened in 1928 as the Normana Theatre, part of the Frels circuit, and was first operated by Rubin Frels' sister Norma, for whom the theater had been named. The July 7, 1928, issue of Motion Picture Times said that the new theater was expected to open in about 30 days, but the September 29 issue of the same publication said that the Normana Theatre had “just opened.”

A Boxoffice Magazine “Twenty Years Ago” feature in the issue of June 11, 1949, revealed that in mid-1929 S.G. Fry and E.D. Nichuls had opened a rebuilt theater called the Palace next door to Frels' Normana, and a May 6, 1930, Motion Picture Times item said that the Hall brothers had taken over the Palace and would update it to compete with the Normana.

Motion Picture Times of June 30, 1930, reported that the Normana Theatre had been sold by Frels to Hall Industries, and that the latter company would renovate the house and rename it the Rialto. I’ve been unable to find the Palace mentioned in later issues of the trade journals, but a 1937 item says that Hall Industries was operating the Rialto and Rex theaters at Cuero, and indicates that the Rex was the Palace renamed.

In 1937, Jack Pickens opened the Trot Theatre in Cuero, and shortly thereafter took over operation of the Rialto from the Halls. He also got control of the Rex, which he apparently then closed. Pickens merged his operations with the Griffith circuit in 1938, and the April 30 Boxoffice item about the merger said that Pickens operated only two theaters at Cuero. The Rialto and Trot are mentioned in later issues of Boxoffice, but the Rex is never mentioned again.

A January 31, 1948, Boxoffice item said that the Rialto at Cuero was to be remodeled and enlarged, and that tenants of shops in the building had been informed by the Griffith circuit that the space they occupied was to be taken over for the theater. I’ve found no further mention of the project in Boxoffice, and in the absence of any photos of the theater more recent than the 1930s I can’t say if this remodeling project was carried out or not.

I’ve found and April 3, 1948, Boxoffice item indicating that the remodeling of the Rialto did take place. It included new restrooms, a remodeled balcony, a new front, and a renovation of the projection booth. The project was nearing completion, the item said.

My father managed the Rialto in the 1940s until moving to Oklahoma in 1951. He took many pictures of the exterior of the theater during those years. I have scanned in several and sent them to the city admin office that took over the building. It was fun looking at the changes over the years.

212 E. Main Street is now occupied by offices of the City of Cuero.

The little building next door to the theater looks to small to have been the Palace/Rex Theatre that was operating in the 1920s and 1930s, so that house must have been where the parking lot is now.

The aka Normana Theatre still needs to be added to the additional info.

Opened as the Normana Theatre on September 11, 1928 with Jack Holt in the “The Water Hole”.