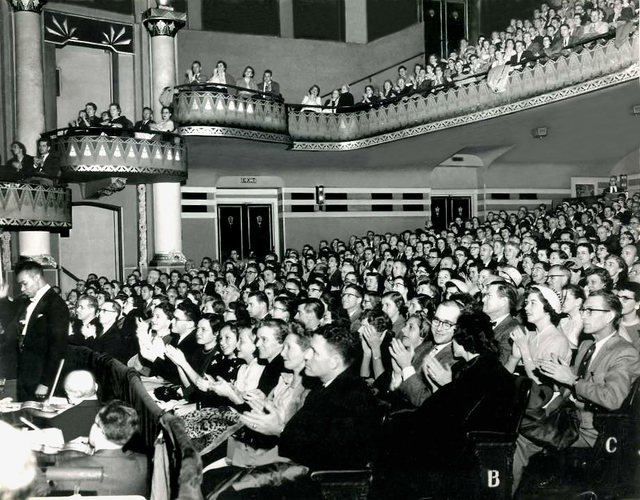 The Erie was the original Proctor’s. The ‘new’ Proctor’s, around the corner on State St. replaced it in 1926. At that time, it became the Erie, and was later named the Wedgeway. It was adjacent to the State, but not attached to it.

I forgot to add that the Erie/Wedgeway was located behind the State’s stagehouse on Erie Boulevard, not State St.

This is listed in the 1914-1915 edition of American Motion Picture Directory as Proctor’s Theatre, State Street, Schenectady, NY.

This has the same address as the former State Theatre.

This web page about F. F. Proctor says that he opened the very first Proctor’s Theatre in Schenectady in April, 1912. This article from the September 18, 1994, issue of The Sunday Gazette gives the exact opening date as April 8.

The article describes the Proctor as having originally had its entrance on the towpath of the Erie Canal, which was soon to be filled in and rebuilt as Erie Boulevard. The theater entrance was later moved into the arcade that opened from the corner of Erie Boulevard and State Street. Originally called Proctor’s Arcade, it was renamed the State Arcade when the second Proctor’s Arcade was built, which was three years after the State Theatre joined the original Proctor’s in the original arcade. To the right of the article here’s a photo of the arcade entrance with the name Proctor’s Theatre on its marquee.

The section of This web page headed “The Grog Shop At The Crossroads of History” has a couple of photos from around 1950 that show what must have been the old entrance to Proctor’s Theatre, but with a marquee for the Erie, which means the original entrance on Erie Boulevard must have been reopened at some point, though the Gazette article doesn’t mention that. The Erie marquee can be seen just past the Wedgewood Building, which is still standing and in which the Grog Shop is located.

The July 28, 1932, issue of The Film Daily had this news about the Erie Theatre:

“William M. Shirley, president and general manager of the Farrash Theaters Corp., of Schenectady, yesterday, said that the Erie, in Schenectady, destroyed by fire May 19, will be rebuilt and re-opened Oct. 1. The house will seat 1,300 and have RCA sound. Guy A. Graves will manage the theater. The State, another Farrash house, closed since July 4, will re-open Labor Day.”

The building still stands with the theatre facade and marquee visible. The auditorium has been removed and now the entire building is being considered for redevelopment. More information here: Wedgeway building