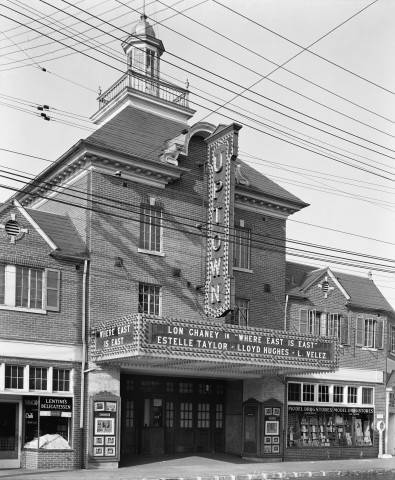 Located in the Schuster Building at the intersection of Eastern Parkway in the Highlands neighborhood, the Uptown Theatre opened on April 8, 1928.

The Uptown Theatre was Louisville, Kentucky’s first theatre to open equipped for showing both silent and sound films.

A single screen theatre, the Uptown Theatre featured a classic proscenium-arch stage, flanked on each side by small faux balconies that masked air circulation vents. As did many theatres of the early sound era, the theatre had an orchestra pit and small backstage dressing rooms for performers who provided entertainment between films.

The Uptown Theatre operated as an independent theatre (not affiliated with any of the national theatre chains of the era) and was operated by locally-owned 4th Avenue Amusements. In its early years, the Uptown Theatre’s slate of films ran the gamut from the first Academy Award winner “Wings” to movies starring the Bowery Boys.

The theatre ran fairly steadily, surviving the height of TV’s popularity in the 1950’s (in 1957, a total of five neighborhood theatres in the Louisville area closed in a single week.) When 4th Avenue Amusements ceased operations in the late-1970’s, the theatre closed and sat idle until the early-1980’s, when it was reopened under the management of Louisvillian Howard Hunter.

Operating under a format similar to Louisville’s Vogue Theatre, the Uptown Theatre ran second run, B-movies and classic films. Howard Hunter was bought out by a local businessman in the late-1980’s and the theatre continued operations until 1989, when a combination of the popularity of cable TV and home video, increased upkeep and operating expenses and managerial missteps lead to the theatre closing for what would be the final time.

A brief attempt was made by the local arts community to purchase the Schuster Building and Uptown Theatre for a proposed film school, but nothing came of the project. The theatre’s auditorium was demolished for parking space in April of 1994. The theatre’s front entrance and lobby area have survived as part of the renovated Schuster Building.

What I think was the lobby is now a Qdoba restaurant’s dining room. Ticket window is still sort of there. I think this was the 2nd to last single-screen neighborhood theater in Louisville when it closed.

That’s correct, kamiel, with the last being The Vogue in St.Matthews (itself now sadly gutted and converted to retail space.)…

I uploaded a picture of the theater from the 1970s, if anyone is interested:

Since it’s public domain, it can be added here if someone knows how.

Though the Uptown was a second run theatre by the 1960s, for some strange reason Planet of the Apes opened here on an exclusive first run engagement in 1968.

“The Strand Theatre Pipe Organ, endowed by the Shelby County Historical Society, has taken another step closer to rebuilding. The Strandâ€™s organ was manufactured by the Louisville Pipe Organ Company (LPO) in 1928. It was one of a handful of instruments the firm made specifically for theatre use.

Our organ (Strand Theatre, Shelbyville, IN), Opus 531, was built in Terre Haute Indiana after LPO moved from Louisville. It was originally built for the Sipe Theatre in Kokomo, Indiana. The theatre never took the instrument, so it was installed in the Uptown Theatre in Louisville, Kentucky. This organ was removed from the theatre and installed in a church in Tell City Indiana. In 1977 it was removed from the church and placed in storage."

“It remained in storage until acquired for the Strand project in 2004.”

This link is to the October 27, 1928 issue of the “Exhibitors Herald and Picture World” that has pictures of the Uptown Theater. View Link

April 1st, 1928 grand opening ad posted in photo section. Ad said that it will opening on the 7th, but no ad in the paper that day. Ad appeared on the 8th.

Fond memories of going to movies at the Uptown Theatre from my home on Sherwood Avenue (off Bardstown Road, a block south of the Uptown) in the 1950s.

I haven’t been able to determine if the firm designed the Uptown Theatre itself, but the Schuster Building was designed by architects Nevin, Wischmeyer & Morgan (Hugh Nevin, Herman Wischmeyer and Frederick Morgan.)

After leaving the firm, Wischmeyer worked on the Louisville Scottish Rite Temple, photos of which can be found on the Internet, so he at least was certainly capable of creating the sort of restrained, elegant auditorium that both the Temple and the Uptown Theatre possess.