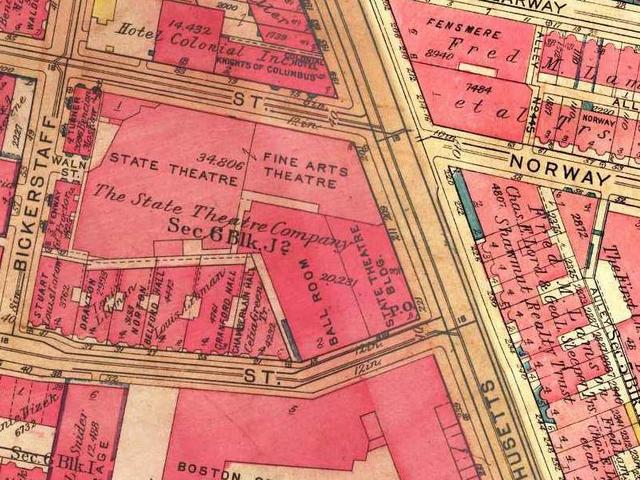 Opened on March 13, 1922 with Ethel Clayton in “The Cradle” & Wallace Beery in “The Champion” plus short subjects. The Loew’s State Theatre was a decadent movie palace with a total seating capacity of 3,7003 velvet seats in orchestra and balcony levels plus opera-type box seats.

Replete with a luxurious ladies room with chairs and sofas and huge mirrors around the room. The theatre was filled with chandeliers and carpeted in an Asiatic theme. The theatre also had a Wurlitzer 3 manual 13 ranks pipe organ and within the 54ft wide proscenium were huge red velvet drapes that opened and closed at each showing.

After closing as a movie theatre in 1959, it went over to live performance and concerts use as the Donnelly Memorial Theatre by 1962 and finally the Back Bay Theatre. Sadly, the old Loew’s State Theatre on Massachusetts Avenue in Boston was demolished in May, 1968.

When the Loew’s State was first taken over by the Boston Archdiocese in 1959, I have a vague memory that it was called “Donnelly Family” Theatre for awhile; not sure of that. I assumed that it was named in honor of a Donnelly Family, but the name could also have implied that it presented attractions suitable for a “family audience”. There’s little doubt that Donnelly, whoever he was, was a supporter of the archdiocese. I also recall hearing that at the time the theater reopened with its new name, the Cardinal himself came to the Circle Theatre, which was located not far from his residence, seeking a spare pair of projectors.

One of the first events at this theater sponsored by the Boston archdiocese was some sort of presentation for Boy Scouts. This took place on Sunday afternoon, July 5, 1959. The younger brother of a friend in Quincy attended.

Let me set the record straight, On September 11, 1959, The Archdiocese of Boston and Cardinal Richard Cushing renamed the Loew’s State Theater, located at 205 Massachusetts Avenue “The Donnelly Memorial Theater” in honor of the Late Mr & Mrs Edward Calvin Donnelly, Sr. of Back Bay. Their continuous devotion and contribution was closely involved with the Holy Cross Cathedral, located in the South End. Their work within the Catholic Church, had spanned over fifty years. The Donnelly Family had been involved in the Advertising Industry in Boston since 1850.

Thank you for clearing this matter up. Now I am wondering if the Donnelly Company that prints phone directories in parts of the country is related to the company E.C. was connected to.

Thanks for the info Clement.

According to the Boston Globe archives, the last show at the Back Bay Theatre was the Four Seasons on Sunday night, May 26, 1968.

The last show that I saw here was “The Kingston Trio” on stage around 1958. It was already re-named “The Donnelly Memorial Theater” at that time. Over the years, while growing up on West Concord St,I saw many movies here. The last movie I saw here was “I want To Live.”

I added a from 1928 map to the Photo section that shows the State, the Fine Arts and the ballroom.