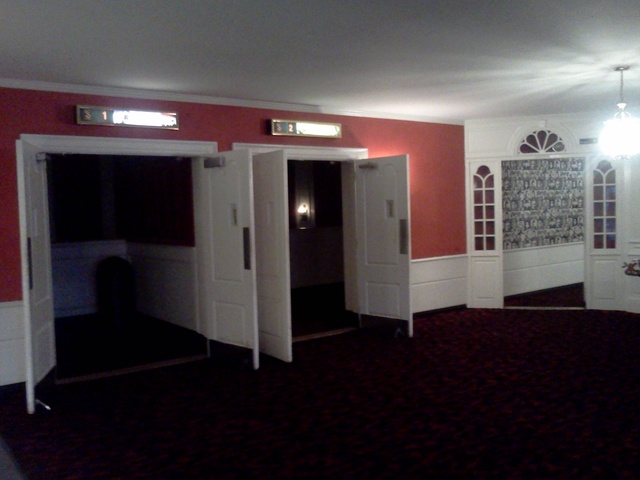 Opened in 1939, this Colonial Revival style movie house was twinned in the 1980’s.

Still showing movies, the Cameo Theatres 1 & 2, it became part of the Patriot Cinemas chain. Since January 1, 2011, it has been taken over by South Shore Cinemas.

The only movie ads which appear in the Patriot Ledger, and then only during the second half of the week, are for the Showcase in Randolph and for Patriot Cinemas (Hanover Mall 10, Hingham Shipyard 6, and Loring Hall in Hingham). It’s a pale shadow for what the situation was like in the past.

How will the theatres stay open if people don’t know what is playing in them?

I looked in a current copy of the weekly Weymouth News today. There is an ad for Patriot Cinemas but nothing from South Shore Cinemas.

The business news in the Quincy Patriot Ledger of April 26 has an article “Film Buffs – Hanover Couple Seek to Keep Local Community Theaters Thriving” about Bret and Michelle Hardy who started South Shore Cinemas to operate the Cameo, and the Mill Wharf in Scituate. Bret Hardy operated the old Scituate Playhouse in 1999. He continues to work a day job, but his wife works full-time at the theaters and they have a staff of 13 part-timers. They still do not advertise in the Patriot Ledger, but keep the Cameo’s marquee current.

Thanks for posting some updates about the Cameo…yes, we are the new operators. I worked at the Cameo as a manager/projectionist when I was in my teens; nice to be back. We hope a lot of personal attention will help us keep it alive. Regarding advertising…we’re depending on online listings, our own website, weekly e-newsletter, press coverage, word-of-mouth, etc. to spread the word. At the moment we don’t believe the payback would be sufficient to justify the high price of newspaper advertising. Thanks for your interest.

Re- movie ads in newspapers. Circulation figures released a couple days ago show continued substantial decline in readership at the Boston Herald, and, especially, the Boston Globe. Younger people don’t seem to read newspapers and, since younger people make up a large segment of the movie-going audience, there seems to be no point in spending money on newspaper movie ads.

South Shore Cinemas(Mill Wharf and Cameo) do not advertise in the Boston Papers. Too expensive and weak circulation. Patriot Cinemas do limited advertising in the Patriot Ledger for the same reasons. If you want to know what is playing you either pick up the phone or go on line. Both have wonderful web sites.

The Cameo celebrated its 75th birthday at 10 AM on Thursday, August 14 with a free showing of “Wizard of OZ”. According to a report in yesterday’s Patriot Ledger, the theater was full. The celebration was held jointly with the Fogg branch of the Weymouth Public Library directly across the street. The Fogg Library has reopened after extensive renovations. (The fine old building can be seen in the Google Street View by rotating 180 degrees). After the movie, the audience trooped across the street for more fun events on the library lawn. The original theater license from 1939 is still posted on the projection booth wall. The article points out that the Cameo’s operators, Bret & Michelle Hardy, also operate cinemas in Scituate and East Bridgewater, and that they have wisely kept their day jobs and thus do not depend on the theaters for income.

Interesting, “The Wizard of Oz” is also the movie that the Somerville Theatre chose for their 100th anniversary this year (in May).

Refurbishment recently finished on the Cameo. There are larger new seats, new carpets and drapes, paint, etc. Seating capacity was reduced by about 100. The marquee is to be repaired next. The owners still also operate cinemas in Scituate and East Bridgewater, and they both still work at their day jobs. There is an article about the Cameo with 3 color photos in the print edition of the Patriot-Ledger, Mon. May 8, 2017.