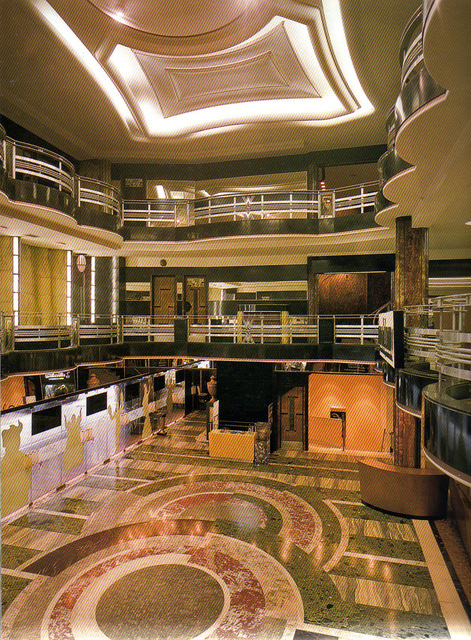 The original Teatro Opera was developed in 1871 by Antonio Petalardo, a local businessmen who foresaw the need for popular theatre catering to the city’s booming population in subsequent years. The original Beaux-Arts style theatre was opened in 1872 on Calle Corrientes, then a narrow street along Buenos Aires northern outskirts, and premiered with a performance of Giuseppe Verdi’s “Il Trovadore”. Specializing in musicals, the theatre was an early success and enjoyed a reputation of being among the most technically advanced at that time, becoming the first in Latin America to possess in-house generators. The massive widening of Calle Corrientes to make Avenida Corrientes led to the theatre’s demolition in 1935, however, following which the Petalardo family sold the establishment to Clemente Lococo, who had the new Cine Teatro Opera built.

Today, the Cine Teatro Opera is located in the centre of Buenos Aires theatre district on Avenida Corrientes 860 at Suipacha. It gets its name from its close proximity to the Teatro Colon (the main opera house which was opened in 1908). It was designed by Belgian-Argentine architect Alberto Bourdon and was opened on 5th August 1936, with 2,500 seats. It was described as the finest first run theatre in Argentina.

The exterior consists of two bays which have Art Deco style decorative features in recessed areas and a central three-tier curved ‘wedding cake’ central feature which contains many windows.

The interior decoration lends the impression of an open air theatre in an Atmospheric style. Floating clouds and shining stars appear in the ceiling and details of street architecture appear on the side walls. Seating is provided for 1,220 in the orchestra, 414 super pullman seats and 866 pullman seats, the latter were at a cheaper price.

As well as screening movies, the theatre also hosted regular Tango concerts led by stars including Hugo del Carril and Edmundo Rivero. Top International performers such as the Follies Bergere Company and the Lido Company from Paris, France, Josephine Baker, Marlene Dietrich, Edith Piaf, Mina, Diana Krall, New York Ballet Company, the Bolshoi Ballet Company, Ava Gardner, Julio Brocca and in the 1950’s while they were touring together Ella Fitzgerald and Louis Armstrong. In 1982, the theatre hosted Mercedes Sosa on her triumphal return to Argentina’s scene after her European exile during the last ‘dirty war’ in the 1970’s, and bandoneonist Astor Piazzolla’s last ‘live’ performance in Argentina in June 1989. It housed some of the most successful productions of the Pepito Cibrian-Angel Mahler duo, which heralded a rebirth of Argentine musical comedy.

After serving many years as a first run movie theatre, economic instability and changing public tastes led to the theatre’s decline during the 1990’s, and in 1996, its proprietors considered selling the building to parking structure developers. Public outcry and activism on the part of National Theatre Director Lito Cruz led to the passage of the National Theatre Law providing subsidies to struggling performance houses as well as protecting them from demolition. It was modernised in 1998, removing most of the Atmospheric style decoration inside the building.

In 1999, International show promoters CIE-R&P purchased the theatre and upgraded its facilities to make it the home of Broadway musicals imported ‘as-is’ to Argentina. CIE (now acquired by T4F) continue to run the theatre, but have signed a four year sponsorship deal with Citi Bank, granting them naming rights over the theatre, exclusive sponsorship and benefits for its customers and intensive logo placement (an agreement which expires in December 2012). This has proved to be controversial, especially, the naming rights issue, which would change the name of the theatre, which is much loved by the people of Buenos Aires. Citi Bank sponsorship has brought one advantage, which is money, used in 2010 to renovate the theatre under the direction of Argentine specialist Alberto Negrin, bringing it back to its former glory, but with a version of Art Deco style that somehow assimilates 21st Century logos.

Further investigation has discovered it opened on 5 August and was remodeled/modernised in 1998.It looks like most of the atmospheric decoration has gone.It now has 1852 seats.More info and photos at
www.petitherge.com/article-22242723.html