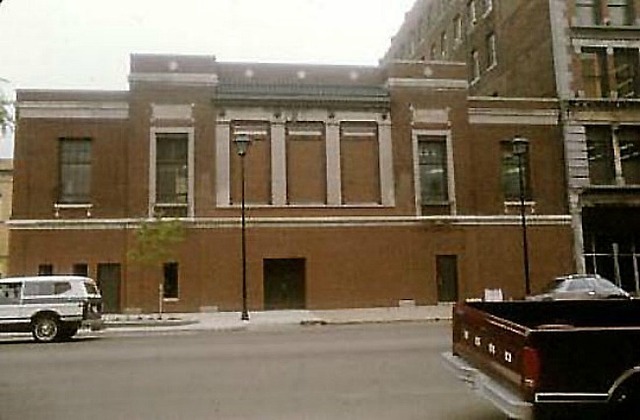 Here is a link to photo of the Liberty in the bottom right hand corner. There is also another theater building half a block east and the roof of the one that was across the street, a little to the west. http://images.indianahistory.org/cdm4/item_viewer.php?CISOROOT=/P0129&CISOPTR=1480&CISOBOX=1&REC=3

Here is a picture of the Liberty in 1935 on the left side of the picture. http://images.indianahistory.org/cdm4/item_viewer.php?CISOROOT=/P0129&CISOPTR=2381&CISOBOX=1&REC=8

If I recall, the paper removed the main floor and installed a two story press on the basement floor.

Here is the Indiana Memory Project’s postcard image of the Liberty Theatre, probably from the 1920s.

Page 71 of Terre Haute & Vigo County in Vintage Postcards, by Dorothy W. Jerse and John R. Becker (Google Books preview) has a photo of the Varieties Theatre (built 1907) and a drawing of the Liberty, which “…opened soon after World War I….” The book’s copyright is 2001 and it says that the structure was housing the Star-Tribune presses, so the demolition of the building took place in this century.

Postcard of the Liberty added to pictures.

Soybean, you are speaking of three different movie theaters. First there was the Grand Opera House, located at the SE corner of 7th and Cherry Streets. It opened in 1897 and was converted to the Grand Theater (to show motion pictures) in the early 1930s. This is the theater that screened Gone With the Wind. This Grand Theater was closed in 1959 and demolished in 1960.

Meanwhile, the Liberty Theater had been built in about 1919 at 729 Wabash, the SW corner 8th and Wabash. It operated continuously until about 1956 or 57, when it closed. When the first Grand Theater closed in 1959, the Liberty was renamed the Grand and re-opened in in 1960. It operated until 1977. The building was later taken over by the Tribune-Star. Demolished 2007(?)or so and now the Children’s Museum stands on that corner.

Ora222: One of soybean’s comments on another theater page indicate that he was born in 1950, so he would not have seen the original release of Gone With The Wind when it ran at the old Grand in 1939. It’s quite possible that the re-release soybean saw “…[w]hen I was growing up….” (so probably either 1961 or 1967, but possibly 1954) was shown at this house.

The records of Hugh J. Baker & Company of Indianapolis, fabricator of structural and reinforcing steel and concrete, indicate that they provided materials for the construction of the Liberty Theatre at Terre Haute in 1918.

Two brief items in the March 30, 1959 issue of Boxoffice mention the Liberty Theatre. One notes that the old Grand Theatre was scheduled to be demolished and that Alliance Theatre Corporation would move its operations to the old Liberty. The other says that Alliance intended to spend $100,000 to renovate the Liberty, which had been dark for some time.

Can anybody tell me who operated the Grand after Cinecome Theatres when bankrupt in 1973? It was reopened after that along with the East Side Drive-In. Cinecome was no more..