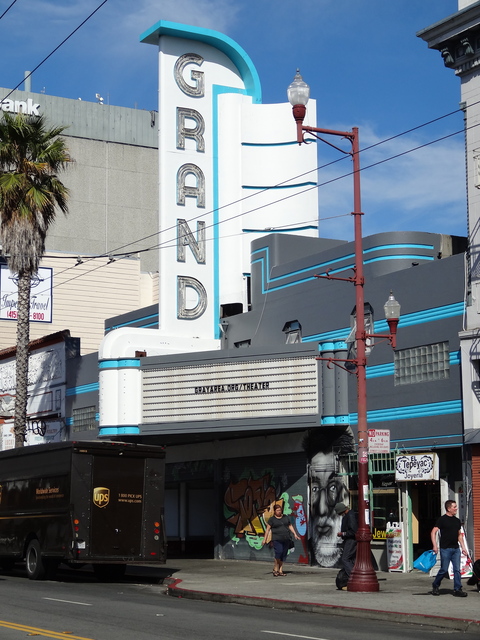 The Grand Theatre opened March 23, 1940. It was designed for D.B. Levin by architects Albert O. Lansburgh and S. Charles Lee in an Art Deco Style. Interior decorations were carried out by the Heinsbergen Decorating Co. All seating was on a single level.

It became a Chinese import store, then for many years a dollar store. If you went inside, you can still make out the old auditorium.

In May 2014 it was taken over by Gray Area on a ten years lease and now presents special events.

The last time I went here was when I watched The Hitcher & Trick or Treat starring the guy who played Skippy in Family Ties with Spanish subtitles & that must have been around the end of 1987.

I must heartily thank the darkened cinema I spent the better part of my childhood in: Long live the remarkable Grand Theater! Fortunately, I grew up to be a pretty well adjusted guy, and even dated girls, despite my love for Horror Films and Monster Movies (it didn’t do bad for Kirk Hammet of Metallica, either). During the late 1960s and early 1970s, the Grand Theater (on Mission St. @ 23rd St. in San Francisco) specialized in Horror, Sci-Fi and Fantasy films and nothing else! As a grammar school-aged monster maven, I was there for every new Triple Feature, which changed every Wednesday. I recall that admission was a mere 50Â¢ for Children — hell, I’d pay $15 to see some of those triple features in the darkened Grand again.

The Grand booked first, second and third run films, and I sat through a great majority of them, and the place was like church to me. Even as a little boy, I often wondered why the other kids ran around and talked during the screenings (“Hey, the movies are running, people!”), so I generally avoided weekend or holiday matinees — sometimes getting my Mother or Aunt to take me on school nights (“No kids!”). GAMMERA THE INVINCIBLE, DRACULA: PRINCE OF DARKNESS, THE SKULL, HERCULES AGAINST THE MOON MEN, THE WONDERS OF ALADDIN, GHIDRAH: THE THREE-HEADED MONSTER, and more, all haunted me there.

The Grand acted as a larger than life supplement to Bob Wilkins' “Creature Features” on KTVU Channel 2 http://www.bobwilkins.tv , and was part of my regular monster movie diet. When the mid-‘70s Kung Fu movie boom knocked the Horror Boom out of its throne, The Grand was the showcase for Chop Sockey triple features and the admission went up to 75Â¢ for Children (Oh, the humanity!). Guess what? I went with the tide. Somewhere in the late 1970s, the Grand changed again — this time it becoming a showcase for Filipino films. After that, I lost track of the Old Girl, and was shocked when I returned to my old neighborhood (I still live in San Francisco) only to find that it was gutted to house a Chinese junk shop. To paraphrase Vincent Price from THE COMEDY OF TERRORS: “Is there no morality left in this world?”

Today, I am trying to emulate the feel of the old Grand Theater triple features with a series of Halloween Horror Movie programs at the historic Castro Theatre http://www.castrotheatre.com called SHOCK IT TO ME! http://www.shockit2me.com/frames/c_movies.htm Long live the memories of The Grand Theater!

Here is a photo from a current loopnet ad:
http://tinyurl.com/2ee5am

Photo of interior of Grand Theatre, taken a few weeks ago. Still some interesting architectural details in that dollar store.

Don’t try and locate the theatre in “DIRTY HARRY” that part was filmed on the back lot at Warner Brothers, and not in downtown San Francisco.

This theater’s status should be “open”. Gray Area has a 10 year lease on the theater and has been presenting events since May 31, 2014.

Went by the Grand today and It is looking great. The new Green curtains inside show some deco class to the old theatre. With the New Mission Theatre do to open for movies down the street soon the long closed theatres of Mission St in San Francisco are making a big comeback for a area of SF that has been lacking entertainment places for many years. This area will be soon be a gold mine and is changing fast. Now lets see If someone buys the old closed Tower Theatre also. Good luck to the Grand Theatre people. Thanks for saving this nice movie theatre in SF for a new generation to enjoy.