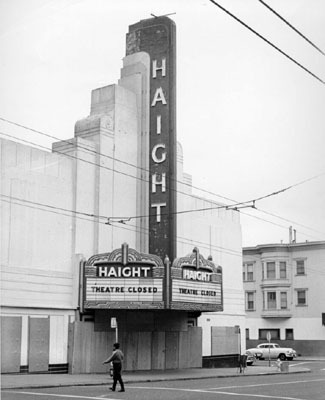 Located in the Haight-Ashbury district of San Francisco at the corner of Haight Street and Cole Street. The 800-seat Haight Street Theatre was opened on March 8, 1910. It was designed by architects Kenneth McDonald Jr. & George Adrian Applegarth in an Art Nouveau style. It was remodeled and enlarged to 1,500-seats when a balcony seating area was added in 1916, to the plans of architect Mateo Matanovitch. The proscenium was 34ft wide and it had a fully equipped stage which was 19ft deep. It was equipped with a Kimball 2 manual theatre organ.

On March 5, 1937 it was remodeled in a Streamline Moderne style to the plans of architects Marc T. Jorgensen & Otto A. Deichmann and the seating capacity was reduced to 1,310-seats. It was operated by the Golden State Theatre Circuit. It was closed as a movie theatre in 1964. Later renamed Straight Theater hosting rock concerts, it was demolished in August 1979. A Goodwill store now operates from the building which was built also containing apartments on the site.

Well, both those things (maybe less getting stoned if were talking pre 1950s) have been happening in the back rows of Cinemas for any number of decades.

Very true Dramatrama.I could tell you some stories from my theatre days.Saw a lot of stuff.

The Haight Theatre is listed among works attributed to architect Otto A. Deichmann in the 1956 edition of the AIA’s American Architects Directory.

As the Haight was built in 1937 I would assume that Deichmann’s partner of that period, Mark T. Jorgensen, was also involved in the project. I’ve been unable to find a listing for Jorgensen in the AIA’s online historical directory. It’s possible he was not a member of the organization.

According to Variety, an attempt to run the Haight as an arthouse catering to gay audiences in 1964 met with community outrage and police harrasment. The experiment lasted less than a month.

wow what a trip to find this. I grew up in the haight from 1962 to 89 . my father started the protest against the gay theater I remember making signs in our basement and carrying them in front of the haight. I was there the last day it was a real theater.it had been renovated and it was the first day of the grand reopening and when the movie was over some kid through an apple through the screen and all of the sudden all the kids went crazy and tore the place up. I also smoked my first joint with janis joplin there when I was just eleven years old she said here you go little dude. how could I say no to her.before they tore it down me and my brothers snuck in through the roof and we took old light fixtures and I had the carpet from the lobby in my bedroom for years and the chandelier from the girls bathroom. many many memories there it was awesome. for a quarter I saw sword in the stone three times in one day.

do you still have the fixtures or pics?

I used to live around the corner from this theater. I had moved to the Haight in the early 80’s and by the time I moved into my first floor apt on the corner of Cole and Oak, the theater had already been demolished. For years it sat as an empty lot, partitioned off by chain-link fence and plywood, and I was blissfully unaware what had previously occupied that space. Its just as well since being a cinema major, I would have been grieving at the loss of such a beautiful theater and probably would have held vigil there everyday on my way back from class.

The Haight in the 80’s was not exactly a mecca for movie screens. Yes, there was the Red Vic, but quite honestly, it sucked. I had no idea of what the inside of the Haight looked like, but it probably would have made a great repertory theater. Sad loss. The next to fall after that was of course the I-Beam.

The Straight Theater, once the Haight Street Movie Theater, was demolished in 1981. 😞

According to this 2015 Hoodline article (researched through SF Chronicle archives and the SF Public Library History Center) the Haight Theater opened in 1910 with 1310 seats.

I’ve added a photo taken in 1982 of a 1921 poster uncovered during a renovation of a nearby hotel.