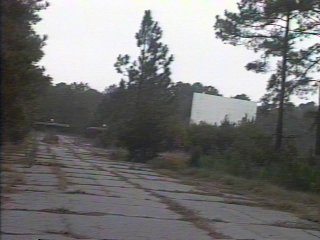 Another Savannah drive-in owned by the Weis family. Opened in late-1960’s, closed in 1982. A Sam’s Club is now on the property.

Weis had just about the whole city,before getting other Georgia locations.

it was a great time…Marsha and I saw many movies at this auto twin..piped in a/c in the summer,and heat in the winter…one of my 3 best memories of savannah..Marsha,my 69 Super Bee and the auto twin.

I was born in 1980 but I vaguely remember seeing a movie being played there so possibly it hung around privately a little longer than ‘82. I lived in the area and always snuck in after they had closed. We rode ATV’s in the open field and around the perimeter on the pavement. The screens, concession and projector building, bathrooms, and some of the speakers were still there well into the 90’s. Those screens seemed so huge standing underneath them! I also know that after it closed it stayed vacant for years but eventually Savannah Christian school had use of the property as a practice field for the football team before later being sold off to Walmart/Sam’s. During the Savannah Christian ownership, I heard a man was electrocuted to deaths on the property attempting to steal copper elecrical wire for scrap.