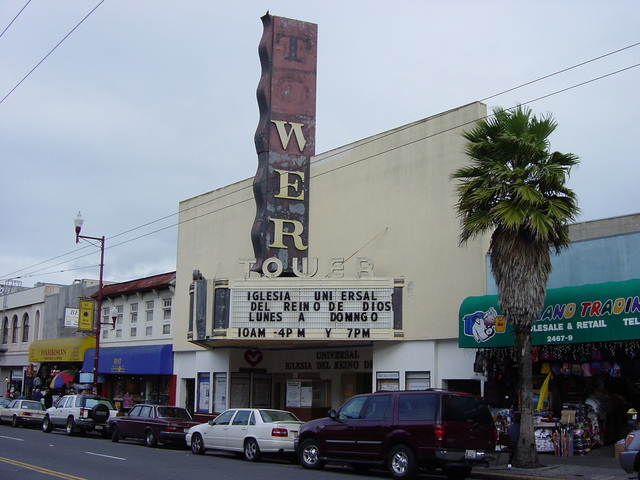 The Majestic Theatre was opened in April 1912. It was remodeled in a Streamline Moderne style by architect S. Charles Lee in 1937. Taken over by the Nasser Brothers Theatres chain, it was remodeled again in 1941 to the plans of architect Henry Anthony Minton and reopened as the Tower Theatre on February 20, 1942 with Alice Faye in “Wee End in Havana” & Ronald Reagan in “International Squadren”. Some detail still remains of the old Streamline Moderne styled Tower Theatre.

The building was used as a church for many years, but by 2007, they had moved out and the building is ‘For Sale’.

Walked by the Tower Theatre yesterday afternoon and saw a banner draped across the marquee announcing the Tower as the future Mission Cinema School. Found this link with photos and more details about the planned school:

Can be seen down the block during the marching band scene in Woody Allen’s TAKE THE MONEY AND RUN (1969).

I have been going through old architectural records of my grandfather, Henry Anthony Minton, and records indicate he did the alterations to the theater. A file titled Nasser Theater, San Francisco, California, 1941-1942 has the correspondence between him and the Residential District Theatre Co. Inc. regarding billing for “work done in connection with the Alteration to the Theatre Building at 2465 Mission Street, San Francisco, California.” Another letter in the file refers to “copies of invoices billed on the Tower (Majestic) Theatre, 2465 Mission Street, San Francisco. I have a picture of the theater from the time…not sure how to post here.

AMinton – if you have the image in your picture or download files, just go to the top of this page and click on photos. When you are there click add photo, and do it.

As Lee’s office was in Los Angeles, he would have hired a supervising architect from the Bay Area for the project, preferably one who, like Minton, had previous experience building theaters.

I see no reference to Lee in HA Minton’s correspondence. I’m guessing that perhaps the person who said the theater was designed by Lee was mistaking it for the Tower theater in LA, which Lee did design.

AMinton: The conflation of the two Towers would have been highly improbable. Aside from the fact that the Tower in Los Angeles had been built almost a decade earlier, the Architect & Engineer item I cited didn’t mention the name Tower:

I doubt that Lee maintained a full office in San Francisco, so 381 Bush must have been the quarters of someone associated with him, at least on this particular project. I checked the address in the 1937 San Francisco city directory, and among the 32 results were one architect, Douglas Dacee Stone, and one structural engineer, John B. Leonard, either of whom might have been Lee’s San Francisco associate for this project.

In any case (and I don’t know why I didn’t notice this earlier) Lee’s remodeling job took place in 1937, and since the correspondence you mention was dated 1941-42, it would have been about a different project. It was not unusual for theaters to undergo alterations requiring an architect’s involvement every few years. One thing we can be sure of is that the name was not changed after Lee’s remodeling job. The house was still listed as the Majestic in the 1939 city directory. That means it’s likely that the marquee and vertical sign with just enough spaces for the name Tower probably dates from Minton’s remodeling rather than Lee’s.

Coincidentally, the August, 1937 Architect & Engineer did have a brief article about a school auditorium in San Mateo designed by H. A. Minton, with illustrations on this page and the text on the previous page.

Hi Joe, all of this is very interesting. In the file that I have, the theater is listed as Nasser Theater as well as Majestic and Tower. Correspondence is with Nasser Brothers, Residential District Theater Co. Inc., 25 Taylor St, SF. Although I don’t have the actual drawings of what was done, I have written Columbia where they are archived to see if I can see what is there (http://www.columbia.edu/cu/lweb/archival/collections/ldpd_7202274/).

In the file that I have, which documents the business side of the work, it seems a fairly substantial alteration was done. Items submitted by the contractor included reinforcing steel, demolition, tile work, marble work, roofing, glass and glazing, plumbing, bracing, shoring, house moving, masonry, lathing & plastering, etc. Seems like a major alteration if the theater had just been remodeled in 1937 by Lee. Would be interesting if we could see what actual work was done in ‘37 and '41. Will keep you posted if I find out more.