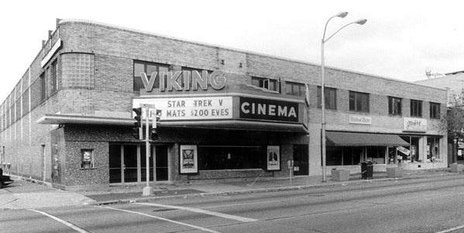 By 1980 it had been renamed Viking Cinema and was on March 22, 1992. The theatre remodeled into stores. It is now the Luna Lounge.

A number of young girls showed up at the Viking Theater at 4 a.m. Wednesday to assure themselves a seat when the show opened after noon. Wayne Berkley, Viking manager, discovered them huddled on his doorstep and invited them in to get warm. Busy with arranging publicity material in the lobby, Berkley asked the girls to help and gave them some large Beatle pictures to move into place.

Berkley is still shaking his head in disbelief. He may not understand the Beatle mystique, but he does know the film packed his house to full capacity Wednesday. Next week, more exclusively adult adulation gets a chance at the Viking when Peter Sellers returns in a sort of sequel of â€œPink Pantherâ€ as he bumbles through â€œA Shot in the Darkâ€. Then it will be the kidsâ€™ chance, perhaps, to shake their heads in disbelief.

Here are some links to pictures of the Viking, from the Post-Crescent website.

Here is an October 1963 ad from the Appleton Post-Crescent:
http://tinyurl.com/2d78mq

A family pass coupon can be seen at:

I started working at the Viking Theatre in 1991. The theatre closed March 22, 1992. It hadn’t shown a first run movie since 1977. It showed 2nd run films for years, and at its end did not do well. The state of downtown Appleton at the time it closed was not very good. The multiple basements and office space left much to be explored while the films were running. Interestingly enough, you could not enter the projection booth from the theatre itself, you had to exit the theatre and enter a door to the right of the main entrance, this also gave access to the offices upstairs, and the multiple basements below. It sat empty for at least a year, before Route 66 renovated the space for a niteclub.

The Luna Lounge is listed at this address now.Is this the old theatre building?

Yes, the Luna lounge is the old theatre building.

Perry E. Crosier, Minneapolis-based theater architect of some renown in the region in that era.

However: “the remained of the building was designed locally.” [no names specified]