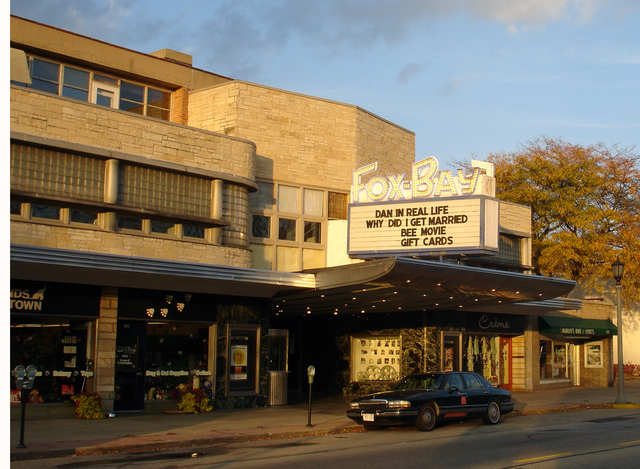 The Fox-Bay Theatre opened in 1951 with 988 seats, and was operated by Cinema Inc. Seating was provided in orchestra & stadium balcony (with no overhang). This now triplexed Art Deco style movie house has become a ‘Cinema Grill’ location.

This is an unusual Streamlined style of cinema with a one line stage having a 6-point suspension contour curtain in red velvet, possibly the only such left in town. When this 988-seater opened in 1951 it was the first of its style in the metro area at 334 E. Silver Spring Dr., Whitefish Bay (this is a northern suburb of Milwaukee). The VARSITY in central Milwaukee had some of the flavor of this design, but not the sculpted, stylized nautical theme projections from the upper walls, nor the stadium-style balcony where one can enter it from the auditorium floor as well as the lobby. One exits the auditorium through light traps with no doors, so sound control can be a problem. The lobby, however, is a gracious curving design with giant showcases a la the adjacent store fronts to hold the posters, etc. The 1952 issue of “Theatre Catalog” had a 2-page photo story on the opening of this then unusual suburban design. Milwaukee’s Pobocki sign company made their patented ‘Inside Service’ marquee where one goes above the lobby, above the upswept canopy and opens a door into the interior of the sign to change the letters on the boards from behind: a real blessing in our snowy, icy winters. The theatre was divided into three screens a few years ago, and a newspaper item on Aug. 22 of ‘99 said that it was the first dinner theatre in the area; how little research was done for that story! In the 30s the CRYSTAL was converted to dinner seating and the tradition of the German Beer Gardens here meant that some form of entertainment with food was as old as the city. A limited menu is served today, and this is one of the few theatres in the city with a liquor license. Two of the three screening rooms are up in the old balcony, while the main floor remains essentially as it has been. The eight 'chandeliers’ there are flattened bowl up-lights suspended up in the attic by clothes line (!) to lower each fixture manually. Theatres were often a mixture of high and low tech to keep costs down, and this is a prime example!

Some additional notes: The odd name is the result of being on the border between two suburbs: Fox Point and Whitefish Bay. The reference to the VARSITY in the previous comment can be verified by going to th issue of Sept. 1938 of the “Architectural Record” pages 51-54., and the “Theatre Catalog” mentioned can be seen at the Archive of the THEATRE HISTORICAL SOCIETY in Elmhurst, Ill. (www.historictheatres.org). The CRYSTAL mentioned can be seen in a photo in “Milwaukee Movie Palaces” a 1986 book by Larry Widen. The future of the Fox-Bay is the more in doubt because it is in a swank neighborhood and in a classy limestone building with curved glass block corners with eight stores, and offices on the second floor above them, so it is quite possible for the local real estate investor who owns the building to convert it to other uses, such as the foretold Barnes & Noble book store which was interested in the space, so let’s hope as a multiplex it will prove profitable. The architects were Ebling, Plunkett & Keymar of Milwaukee.

The building that houses this Theatre was just sold to New Land Enterprises. They own the Landmark Theatre in Milwaukee, and have announced plans to create condominumums on the property using a parking lot space. There is no threat to the Fox Bay Cinema.

You can find details about the sale here:
View link

I was aware that Katz properties was trying to offload the building several months ago, but unaware that they had proposed condos. At issue seems to have been the height of the new building. Cinema fans should be pleased about this development.

Thanks, Tim R., for providing these links which I had not seen. If you would like to be placed on my local list of those to receive occasional bulletins regarding local theatres developments, merely click on my name in blue below to be taken to my Profile page, and there click on CONTACT INFO and send me an E-mail with the word “theatre” somewhere in the Subject line.

The entry for architect Albert F. Keymar in the 1956 edition of the AIA’s American Architects Directory lists the Fox-Bay Theatre as one of his works, with the design date of 1949.

I can confirm that this theater is closed. I spoke with the owner in June 2021, and he said he would not be reopening it.