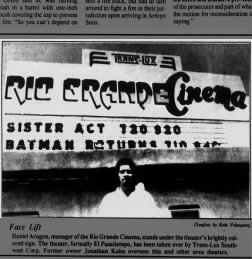 The Rio Grande Twin Theater opened in the 1970’s and closed in September of 1999. At the time of closing it was operated by Trans-Lux Theatres. The last two movies were "The Sixth Sense" and "The Blair Witch Project".