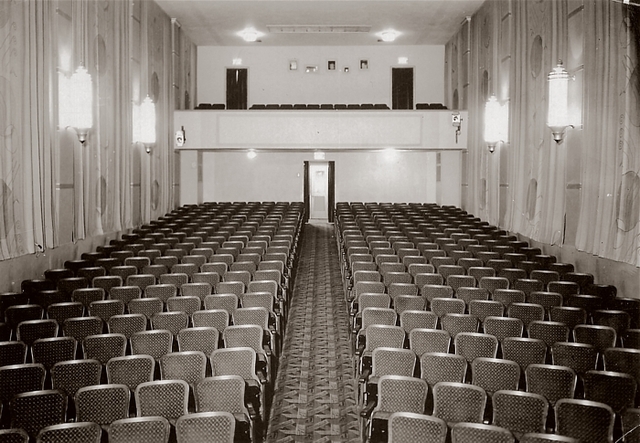 The Rio Theatre opened December 25, 1934 with Dick Powell in “Happiness Ahead”. This Art Deco style theatre was renamed Vigilante Theatre on April 10, 1947, and operated into the 1950’s. The building is today home to a fitness center.

The Rio survived a violent earthquake in 1935, according to the Helena Independent:

REPORTS THAT RIO TO OPEN NOT TRUE; STATEMENT ISSUED

Reports about the Rio theater opening in a few days are entirely erroneous, according to Paul McAdam, manager. In a statement yesterday, Mr. McAdam said: “The show will not open until everything has quieted down, the tremor ceased, and the building carefully inspected by the authorities. An examination of the building indicates there is no apparent damage done.

“The quake did not seem to strike as hard on the downtown section of town as in the residence district, and we even continued the show for a few minutes when the power was on. Not realizing the extensive damage done, we made an addition to an ad prepared for the morning paper. However, upon reaching home, the real force of the earthquake was apparent; our brick dwelling was in shambles, and our folks nearly hysterical. In forgetting about the ad, we no doubt caused considerable confusion, which anyone experiencing the quake can easily understand.
[Helena Independent; October 23, 1935]

The Rio became the Vigilante in 1947. A small photo showing the new name on the marquee appeared in the June 14 issue of Boxoffice Magazine that year. The caption said: “SIX GUN ATMOSPHERE— Having donned a strictly western dress, Helena’s Rio Theatre has changed its name to the Vigilante and now caters to those who like their westerns rough and ready, all at reduced prices.”

Rio grand opening ad uploaded in the photo section for this cinema.

This one opened as the Rio on December 25, 1934. The architect was Sigvald Berg.

Reopened as the Vigilante on April 10th, 1947. Grand opening ad in the photo section.

The Rio Theatre Was First Operated By Warner Bros Management Circuit For Only 2 Or 3 Years.